Mapuche natives Lonko (leader) Alfredo Tralcal Coche and brothers Benito, Ariel and Pablo Trangol Galindo are on their 114th day of the hunger strike the initiated on June 6, after having been under imprisoned in custody for 15 months. Declarations of anonymous witnesses and the stubbornness of the government are keeping them in prison. They accuse them of setting an evangelical church on fire. Never mind that one of them, Ariel Trangol, is evangelical. And that they were 10 kilometres away from the place when they were detained by the Chilean government.

They have lost almost 24 kilos each. To the Medical College (Colmed) “prolonging the hunger strike for more days is unsustainable, vital functions are compromised and sequels will be irreversible”. The prisoners have muscular pain, liver damage, heart damage, kidney damage and digestive tract damage. They also have neurological deterioration that will be partly irreversible.

The Mapuche political prisoners have issued a communiqué in which they stated: “our detention took place more than 10 kilometers away from the crime scene, and what they found on us were the tools we use to work the land. We believe that this attack on us is due to our support of our support for the lof [communities] wenteche [of the Wenteche lineage of the Mapuche people] from Gulumapu*. To justify this, they invoke the anti-terrorist law (…). We’re innocent of the charges we’re accused of. The Prosecutor’s Office has no proof and we’re unfairly imprisoned while we’re risking our lives. The investigation they carried out hasn’t been able to produce a document that justifies keeping us in custody. We’re making a call to solidarity to help us fight this enormous injustice we’re suffering, and to not let us die.”

Other witnesses who live in the area have declared that it wasn’t the Mapuche who set the church on fire.

The families of the prisoners and human rights organizations have organized rallies in many cities, a camp outside the Temuco prison where they are kept, and have occupied the Cathedral of Cañete, Concepción and Temuco, and the headquarters of the National Corporation of Indigenous Development (Conadi). The latter action of protest was carried out last September 15, in Santiago de Chile, and was violently evicted by the Chilean Carabineros.

The Mapuche prisoners are demanding: a fair trial in a reasonable amount of time, to not be trialed under the Anti-Terrorist law, to not use faceless witnesses, and immediate release from custody.

* The lof wenteche have been struggling for decades to defend their land against invasions of economic exploitation projects, and by extension, with the government of Chile. 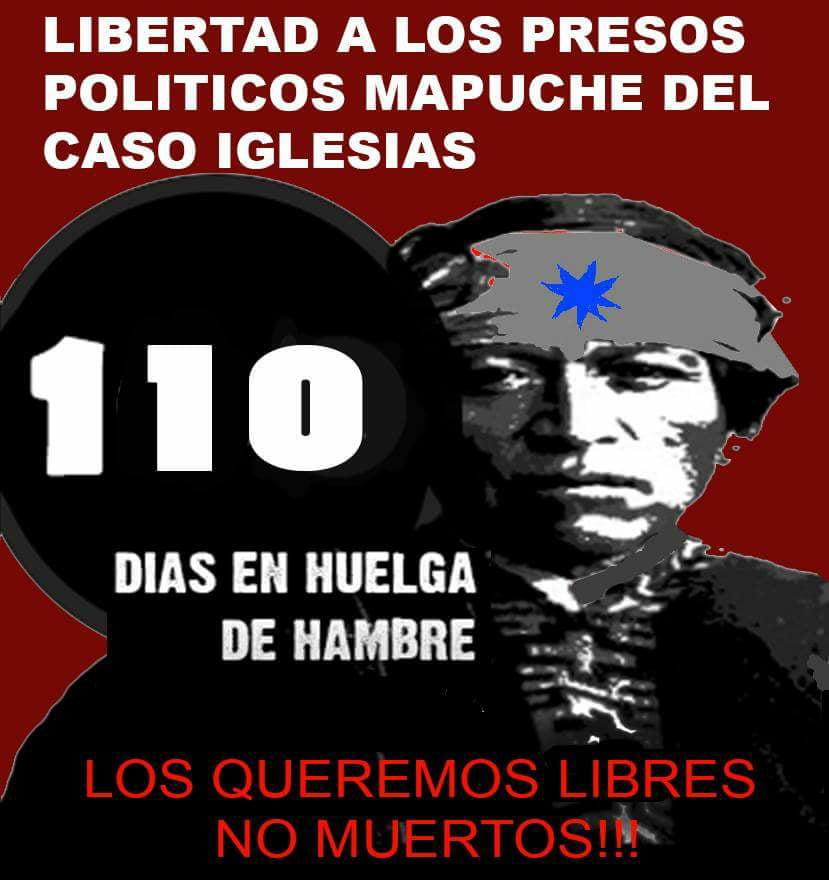