France gathered for the 14th week of Gilets Jaunes protests, with the injury toll of the worst civil unrest in decades now resembling that of a small war. Yet despite pleas from victims, Emmanuel Macron is tightening the screws.

“This is not normal. We are in France, one of the oldest and best democracies in the world,” says Fiorina Jacob Lignier, who lost her eye at a demonstration in Paris on December 8. “We usually condemn from afar other countries where this occurs, that this is happening here is unbelievable.”

Lignier, a 20-year-old philosophy student, traveled from the northern city of Amiens to march on the Champs-Elysees to protest against fuel taxes with her boyfriend, Jacob Maxime.

He told RT that they were marching with a column of peaceful demonstrators, when a group of masked radicals began to vandalize a shopfront more than 50 yards away.

The police “began shooting ‘Flash Balls’ and throwing grenades in all directions,” during which the couple spent two hours “penned in between a line of gendarmes and a wall, with no chance to flee.”

Lignier said the last thing she remembers was the cries of cops clearing the way for firemen, then a gas grenade hit her on the head, and she was on the ground. 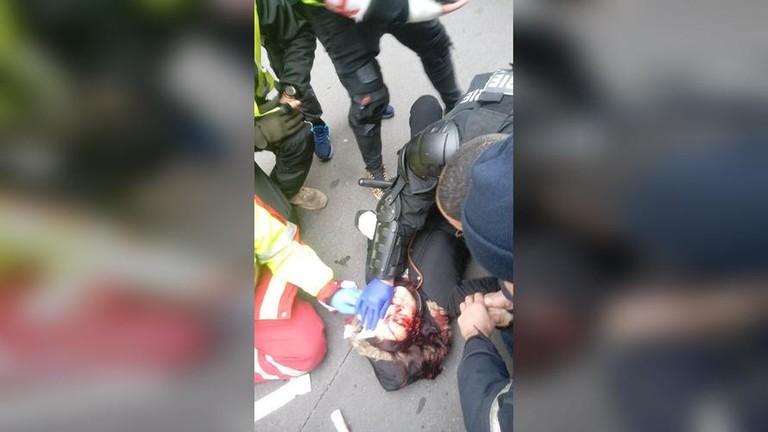 When she woke up, her nose was broken, her face swollen from fractures, and she couldn’t see through her left eye. Over the next 16 days, Lignier underwent two surgeries, and is still waiting for two more.

My eye still hurts. During the next surgery, they will remove it. It’s hard to get up to feel all this, I can’t go to lectures, I can’t read, and moving my eyeball is excruciating,” said Fiorina.

“I do not recognize my country. These are not the values I was taught at school.”

For most demonstrations anywhere in the West, Lignier’s story would have made her a poster girl for law enforcement excesses. Among the Gilets Jaunes, her case is just one of many.

The sheer scale of concentrated peacetime violence since November is hard to comprehend.

Following last week’s demonstrations, the Interior Ministry reported that 1,300 policemen and over 2,000 demonstrators had suffered injuries. Considering the difference in equipment and organization between riot police and the mostly unarmed crowd, most French media have speculated that the real civilian toll is several times higher, particularly as many have not had their injuries officially recorded.

Desarmons-les (“Disarm Them”), an activist group that protests against state violence, has been compiling a toll of the most serious cases.

The last one, dated from last month, lists 140 names. They include Zineb Redouane, an 80-year-old Marseille bystander who died of a heart attack as doctors tried to help her after police fired a tear-gas grenade in her face through the window of her apartment.

Also among them is Sebastien Maillet, whose hand was torn off when another grenade landed close to him during a protest outside the National Assembly last weekend.

In summary, 20 have lost eyes, five hands have been partially or entirely torn off, one person lost their hearing as a result of a TNT-stuffed GLI F4 stun grenade.

“I have repeatedly seen injuries consistent with those suffered in serious traffic accidents, or after falls from a great height,” neurosurgeon Laurent Thines told L’Express newspaper this week.

These are real wounds of war. And they are happening in France, on the streets.

While the May 1968 student and worker protests that upturned French history claimed four lives directly, Thines believes the overall scope, length and intensity of violence was much more contained than the current chaos. If so, France is likely witnessing the worst non-wartime bloodshed since the Paris Commune massacre of 1871.

For Maxime, a different comparison comes to mind – the most painful and humiliating conflict for the post-WWII modern republic.

“We have not seen such injuries in France since the war in Algeria,” he said. “The instructions given to the police by the interior minister and President Macron represent systematic and violent repression.”

None of those hurt in the past three months deny that there is a belligerent element among the demonstrators. But also none believe that the police are attempting to minimize the violence.

While broader discussion has centered on whether the government has prolonged the standoff with its miserly concessions, or has even stoked it as a point of principle, there has been highly specific criticism of police tactics.

Human rights officials, activists and trade unions have urged French police to review its use of so-called “sub-lethal weapons,” particularly LBDs – the odd-looking hand-cannons that have become a symbol of the confrontations. Banned in all but three European Union states, these French-patented devices fire relatively slow and large compressed foam – or ‘Flash’ – balls, and have been responsible for most of the injuries, alongside tear-gas projectiles.

In theory, strict limitations exist on their use, but these are open to interpretation (such as what constitutes self-defense) and videos show armored cops firing the guns at will, pointing them at demonstrators and even journalists when under no immediate threat. Their supposed non-lethality may mean that they are actually used more freely than real guns, and together with the Molotov cocktails and rocks thrown by rioters, encourage the deadly street theater of French protests.

The police have not budged, and have won a court case allowing them to persist with their current loadout.

“I have never seen a policeman or gendarme attacking a protester,”said Christophe Castaner, who recently placed an order for a further 1,280 LBD cannons, earlier this month.

In fact, no policemen have been reprimanded for a single one of the injuries sustained on the streets, and a mere 100 Yellow Vest cases are being investigated, which includes non-violent and relatively trivial incidents.

Earlier this month, despite a split inside Emmanuel Macron’s own party, the National Assembly passed a law imposing six-month arrests and hefty fines on “suspected hooligans” participating in demonstrations, an echo of similar legislation passed in the aftermath of May 1968.

Human rights groups say that the law is a denial of the basic democratic freedom of assembly.

“My message is clear: Any destruction and aggression will be continued and will be punished,” insists Castaner.

‘Macron you will pay’

In the face of government recalcitrance, some of the victims now hope to achieve justice through the courts.

“We filed a complaint, however, we must expect 10 years of procedure – a long time. We just want the French state to be censured, and for the police brutality to be acknowledged,” said Maxime, Lignier’s partner.

Lawyer Philippe de Veulle, who represents several prominent Gilets Jaunes, is hoping for a positive decision from the European Court of Human Rights, telling RT that its word will have “not legal, but political ramifications” – shaming the Europhile Macron government into stopping its “unprecedented” actions.

For his client, Jerome Rodrigues, who lost an eye after emerging as one of the leaders of the movement, justice is more simple: “I lost my eye Macron, and you will pay for it,” he recently posted on Facebook.

Whether or not the current government suffers at the ballot box in the upcoming European or future presidential and parliamentary elections, however, one thing is becoming clearer. With each passing week, each angry crowd, and each new injury, it is becoming harder for Emmanuel Macron to dismiss the Yellow Vests as a transient and marginal movement. And long after he is out of the Elysee Palace, the historical testament to his rule will remain in stumped hands, broken bones and disfigured faces.