They spend their whole, modest life together, now they found themselves in a tragic position. Filippos is 83 and his wife Eleni turned 84. Since a month they have been facing a new challenge: they became homeless after they were evicted from the home they rented.

They packed their belongings and left, not knowing where to turn to, where to go.

They ended in the courtyard of Agios Georgios Church in Keramikos district of central Athens, where they spend their homeless days and nights.

They spend the days on the benches, they sleep on the cold stones at night.

There in the church courtyard, they were spotted by a reporter of news website zougla.gr

Eleni said that they were due four monthly payments and that’s why they were evicted.

The couple had been living on an approximately 600-euro monthly pension, the husband has been receiving. From this money they had to pay rent, utility bills, buy their food and medicines. they did not manage all this burden.

Philippos told ANT1 TV that he had older debts that had to be paid. 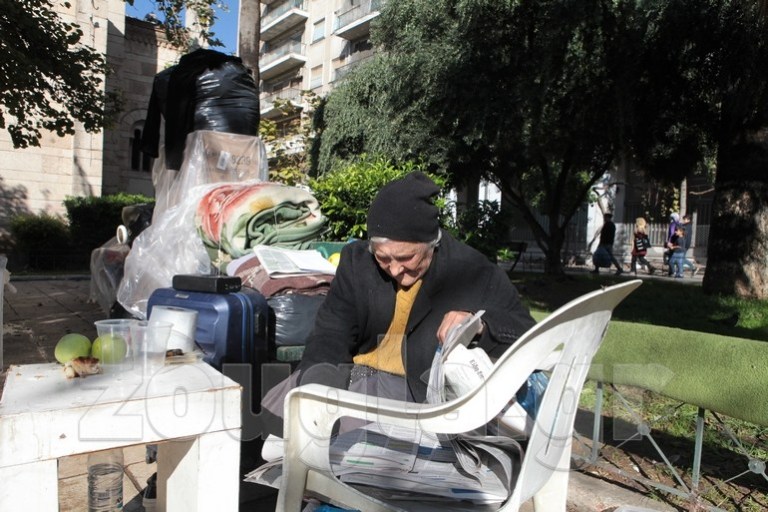 Speaking on the camera of zougla, the woman said that “they want to bring my husband to the crazy house.”

She complained that “everybody says they want to help but they don’t do anything.”

She recalled that a bishop came and the next day his chauffeur gave her husband 50 euros.

Eleni could not say exactly how many days they have been in the courtyard “20-28.” Neither can she remember the area where the couple used to live before the eviction.

Read also:
A Circle in the Darkness: Post-War Europe

But she can remember where they spent the other night when it rained in Athens. “We stood there, under the shed, the whole night,” she said.

Speaking to ANT1 TV, the social services of the Municipality of Athens said that they offered the couple to move into a hotel in central Athens which serves a hostel for homeless. But the couple refused to accept.

On his part, Philippos said that he was waiting for the pension money to be booked on his account by the end of the month, so that he can rent a small flat for both of them.

People have reportedly sent donations to the homeless couple.

PS It may sound like a difficult social case, but at this age and health conditions, the couple needs urgent help. Will the social services manage to convince them to move into the hostel?