Thousands of Greeks have made Germany their home, but heated discussions of the crisis have left many feeling troubled.

Amid disagreements about the Greek crisis, homegrown solutions that morph into fights and soured friendships, Greeks based in Germany are no longer feeling so comfortable in their home away from home.

With a Grexit becoming a real possibility, many Greeks in Germany are deeply upset at how the country they have chosen to live in is treating their homeland.

Greeks are Germany’s fifth largest group of immigrants after Turks, Poles, Italians and Romanians. Most Greeks now living in Germany are descendants of the wave of Greek guest workers who started coming to Germany in the late 1960s.

Today, approximately 329,000 Greeks live in Germany, of whom 12,491 live in Berlin. These are unhappy times, many agree.

“Much of the European and particularly German media have been shamefully unfair in the way they have portrayed the crisis, with populist irony and sweeping insults,” Stavros Stathoulopoulos, a Greek PR consultant who has worked as a diplomat, told Handelsblatt Global Edition.

Mr. Stathoulopoulos is one of many Greeks in Germany who feel uneasy about their adopted country’s relationship with their home country.

Kostas Tatsis, a Greek member of Germany’s Social Democrat party and general secretary with the center-left PASOK’s Greece chapter, is just as annoyed about how his country has been portrayed in Germany’s media.

“There are so many cliches about Greeks and only half the truth gets told,” he told Handelsblatt Global Edition. “It has to stop.”

Read also:
For a Labour victory and a Tory defeat

They are angered mainly by reporting in Germany’s tabloid newspaper Bild. The newspaper asked readers in February to take a “Grexit selfie;” readers should send photos of themselves holding a newspaper with the headline “No more billions for the greedy Greeks.” The tabloid ran other provocative headlines too, such as one in October 2010 reading, “Sell your islands, you broke Greeks!”

Elina Axioti, a doctoral student living in Berlin, said that although her life hasn’t been directly affected by the Greece crisis, she tried to avoid discussing the situation with Germans.

“Sometimes at parties or in conversations, when people from Germany realize that I’m from Greece, the atmosphere changes. I’ve sensed a kind of disappointment or unease that’s hard to put into words.”

Ms. Axioti also admitted that she experienced the opposite, a situation of “extreme compassion” when sharing a table at a restaurant with a traveler from Munich who apologized to her and her friends about Germany’s attitude to Greece.

“My country’s image is being shaped by German conservative populists – and the media makes me feel like I’m somehow a ‘lesser’ E.U. citizen,” Mr. Stathoulopoulos said.

He added that lately, when paying with his Greek credit card, people in stores had responded strangely. “That’s not exactly a good feeling to have people doubting your financial stability,” he said.

Kostas Papanastasiou, the first migrant actor on the famous German soap opera “Lindenstrasse” and owner of a Greek restaurant popular among Berlin’s leftist ’68 generation said some of his most loyal German customers had turned on him when they learned of his views on Germany’s austerity measures towards Greece.

Read also:
Germany Can't Give Up on Cooperation With Russia in Oil and Gas - Merkel

“All these Müllers and Meiers told me to leave Germany if I didn’t like it here,” he told Handelsblatt Global Edition.

Other Greeks in Germany have come up with snappy responses to the criticism.

He has other suggestions too: that Greece installs a social security system for the poorest of the poor, akin to the social welfare, or Hartz IV, system that exists in Germany. Under German law, every resident without work is entitled to €399 ($441) per month on top of housing and childcare benefits.

Greeks on the defensive often cite the 1953 London Agreement on German External Debt in discussions about a haircut. Mr. Stathoulopoulos thinks this should be part of the solution to the crisis.

Mr. Tatsis, on the other hand, said he thinks Greece needs to get rid of its debts by paying up.

“I won’t feel good as a Greek knowing that I have debts.” 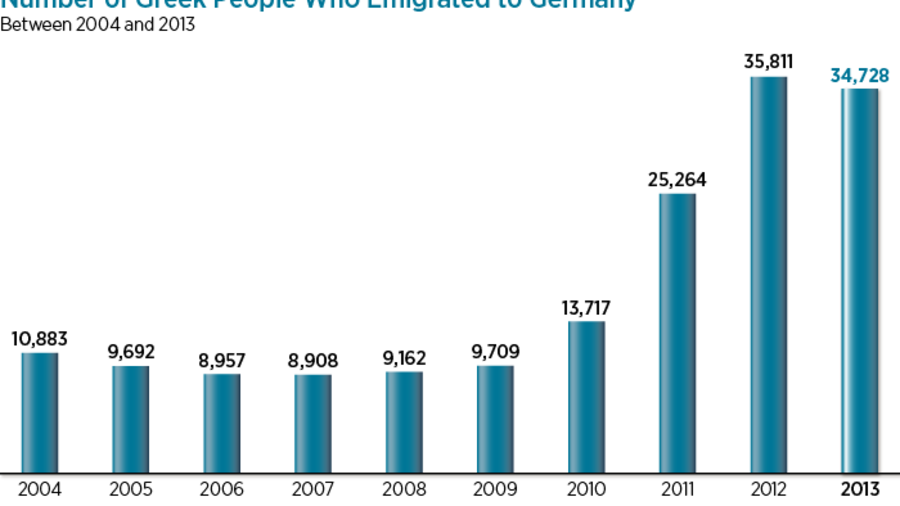 Number of Greek People Who Emigrated to Germany-01

Sarah Mewes is an editor at Handelsblatt Global Edition in Berlin. To contact the author: mewes@handelsblatt.com

Figaro and the French Revolution

Blinken Claims Iran Is Not Serious About Reviving the Nuclear Deal