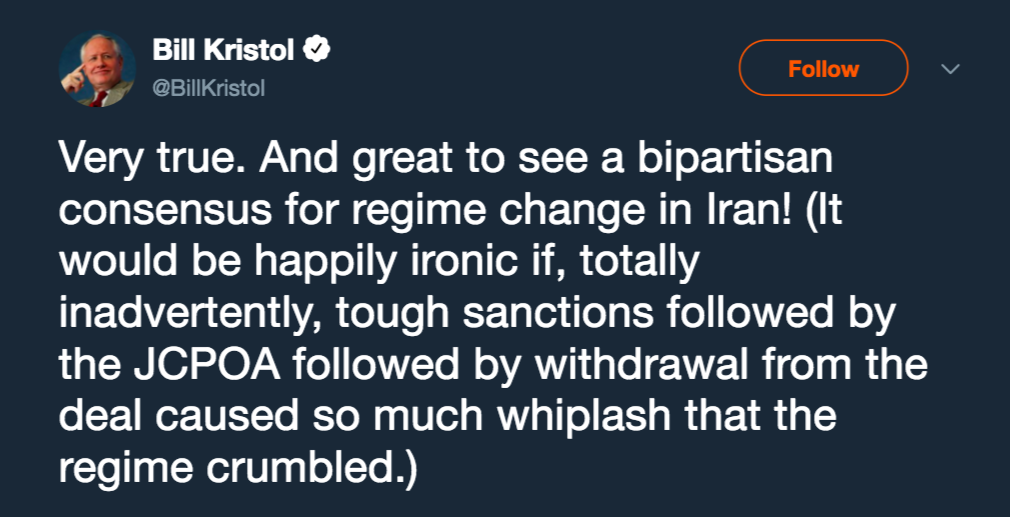 One year after the CIA escalated covert operations in Iran, the protests across that nation are reportedly beginning to get more violent. This is happening on the same day the Iranian terror cult MEK hosted Rudolph Giuliani and Newt Gingrich in a pro-regime change rally that was so sparsely attended that half the audience consisted of bused-in Europeans unaffiliated with the cause.

We are now realistically being able to see an end to the regime in Iran,” said Giuliani, who earlier this year infamously led a “Regime change! Regime change!” chant at a related MEK event.

“The Mullahs must go, the Ayatollah must go, and they must be replaced by a democratic government which Madam Rajavi represents,” Giuliani said in reference to MEK cult leader Maryam Rajavi.

“Freedom is right around the corner,” added Giuliani, who is currently serving as President Trump’s lawyer. “Next year I want to have this convention in Tehran!”

MEK expert @joanne_stocker estimates that @AmbJohnBolton has been paid upwards of $180K by the group to speak at its events. Now he's in a position to advocate for it from inside the White House. @RichardEngel #OnAssignment pic.twitter.com/kxoi2FQ5dn

So things appear to be escalating. We saw very similar situations in the lead-up to both Libya and Syria, right up to and including the shady ties with the suspiciously well-funded extremist group. We can expect the CIA operations, propaganda and psyops to combine with the effects of starvation sanctions in a way which leads to widespread chaos, which we can expect to see erupt into violence of disputed origin, which we can then expect to see blamed solely on Tehran, which we can then expect to see elicit calls for humanitarian interventionism. Just like Libya and Syria. If the formula ain’t broke, why fix it?

And the bloodthirsty warmongers of Washington couldn’t be more thrilled.

“A democratic Iran not only would free Iranians from repressive theocracy but produce closer ties between our two countries; real security, economic , and moral benefits for both Iranians and Americans,” contributed Michael McFaul, an ambassador to Russia during the Obama administration.

“Very true,” tweeted Iraq war architect and PNAC founder William Kristol. “And great to see a bipartisan consensus for regime change in Iran! (It would be happily ironic if, totally inadvertently, tough sanctions followed by the JCPOA followed by withdrawal from the deal caused so much whiplash that the regime crumbled.

This is Bill. Bill is always wrong about everything. Bill has always supported regime change in Iran. Don't be like Bill. https://t.co/ABOm4Opd1l

The word “bipartisan” is a popular buzzword in establishment politics, because since the two-headed uniparty has worked so hard creating the illusion of opposition among its leaders and very real hatred across America’s fake political divide, the sight of these two groups getting together on something can be spun to give the impression that it must be a very commonsense and important pro-human agenda. Really, though, what it generally means in practice is neoconservative Republicans and neoconservative Democrats getting together to do something horrible.

Bill Kristol used his influence in the Bush administration to advance the agenda that his Project for the New American Century think tank had laid out several years earlier for US military-enforced planetary domination. It began with the catastrophic and unforgivable invasion of Iraq, but according to US General Wesley Clark the plan once if got through to the Pentagon was to take out six more governments after that: Syria, Lebanon, Libya, Somalia, Sudan, and, finishing off, Iran.

Read also:
Noam Chomsky: If Trump falters with supporters, don't put 'aside the possibility' of a 'staged or alleged terrorist attack'

Kristol lost some credibility as the actual horror of what the Iraq invasion had unleashed upon the world began to really sink in to social consciousness, but since 2016 he has rehabilitated his image by forming a close anti-Trump alliance with the birthplace of neoconservatism: the Democratic Party. Kristol is now one of #Resistance Twitter’s most popular pundits and a regular guest analyst on liberal cable TV due to his staunch support for neoconservative policies that this administration claims to oppose, including escalations against Russia.