The measures to contain the coronavirus pandemic not only comprise a unique experiment in health policy. They have socio-political and economic implications so great that the outcome will shape the fate of humanity in the long term.

For economists, in principle, the primacy of health policy must be accepted. Therefore, it must now be a matter of keeping the unavoidable economic implications as limited as possible. Yet the effects of the safety measures are comparable to an artificial coma of the entire economic system. Economic policy is therefore faced with the task of artificially feeding and ventilating the ‘patient’ as comprehensively as possible during this phase, so that it suffers the least possible long-term damage.

In the short term, this mainly involves measures to secure liquidity. These include tax deferrals and comprehensive government guarantees for loans required to bridge liquidity bottlenecks. In Germany, the instrument of short-time working compensation plays an important role. It enables companies to reduce employees’ working hours, with wage compensation and social-security contributions paid by the Federal Employment Agency (generally at 60 per cent of the norm or 67 per cent if there is a child in the household).

But securing liquidity is only the first line of defence. Since the crisis will continue for at least 4-6 weeks, the state must compensate the loss of income of companies and many self-employed by direct transfers. This can be done in the short term by direct subsidies, such as the emergency aid being offered by the Free State of Bavaria.

Read also:
A more critical view on Corbyn and the Labour

A model of negative income tax should be considered as a comprehensive solution. Companies and the self-employed would be repaid by the tax office a certain percentage (initially 25 per cent would be conceivable) of the income or corporation tax already paid for 2019. To avoid deadweight effects, the tax return for 2020 could be checked to see whether there had actually been a noticeable deterioration in profits compared with 2019. In the event of only a minor loss of profits (say 20 per cent), the negative income-tax payment would be reversed.

Without such far-reaching transfers, the entire economy, especially the financial system, will suffer sustained damage, which will make it difficult to achieve rapid economic recovery once the pandemic subsides. Since this artificial feeding of the economy will involve high fiscal costs, however, the question is often asked as to whether states will be able to raise the necessary financial resources.

The answer to this is Modern Monetary Theory. Its main message is that in principle there are no financing restrictions for large countries. A historical example is the financing of wars.

Data for the United Kingdom and the United States show (see graph) that there was a significant increase in the ratio of debt to gross domestic product during the two world wars. But this did not lead to major inflationary problems, apart from a brief episode immediately after the end of the second world war. 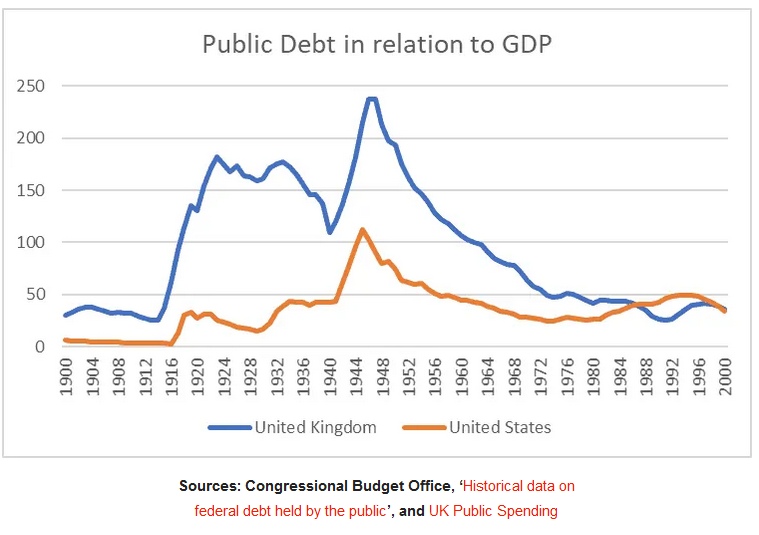 After the Great Recession in many countries another strong increase in the debt ratio was required (see chart). As it was compensating a strong negative demand shock, the higher public debt did not cause any financing problems and nor did it lead to an increase in inflation. In addition, the very high debt ratio of Japan (237 per cent in 2019) shows that the limits to this ratio are very flexible. 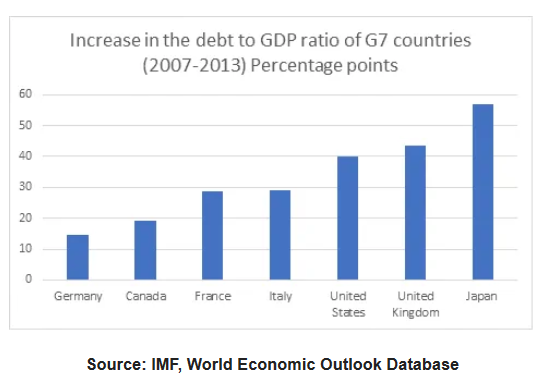 The good news therefore is that large countries are quite capable of compensating for the coronavirus-induced loss of revenue for companies, workers and the self-employed by means of comprehensive direct transfers, without any financial restrictions. If it is not possible to finance the additional government debt via private investors on the capital market, central banks are prepared to buy government bonds, in principle without limit. The US Federal Reserve and the European Central Bank expressly confirmed this on March 15th and March 18th respectively.

The danger conjured up by MMT critics, that high deficits could lead to inflation, is very unlikely in the case of the Covid-19 crisis. What we are witnessing is a collapse in consumer demand never before experienced at this intensity, which in itself has a clearly deflationary effect. The risk of currency crises can also be ruled out, as all countries will increase their debt at the same time.

Problems arise only in those countries which are not able to borrow sufficiently in their own currency. In Europe, this is particularly true of the highly indebted member states of the eurozone—above all Italy. Here, solutions must be found for joint financing (Eurobonds), whereby the funds are not paid to individual member states in the form of a loan but as a transfer.

One model for joint borrowing is a European Community credit facility established in 1975 to finance balance-of-payments problems caused by the oil crisis. For emerging and developing countries, the International Monetary Fundcan be called upon.

All in all, the coronavirus crisis is probably the biggest challenge for the global economy since World War II. To borrow a phrase from the former ECB head Mario Draghi, the decisive factor is a ‘whatever it takes’ fiscal policy. The good news is that there are no financial restrictions on large countries in this regard.