In 2007, on the initiative of the SP, representatives of modern left parties gathered at De Weverij in Oss to exchange experiences and discuss the dilemmas they each faced in an open atmosphere. In the meantime 2016 has arrived and more parties and party leaders are participating. In the years since that inaugural meeting, moreover, the Norwegians, Danes, Icelanders, Greeks and Cypriots have all gained experience of government. 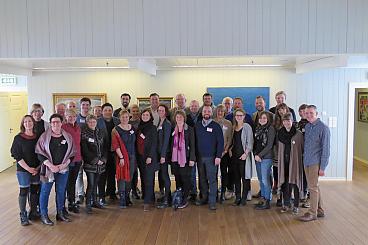 We have just had the ninth meeting of the modern left, this time in Iceland. Although we’re no longer bit players, almost all of the parties are wrestling with enormous challenges. How to find a social path out of the crisis and how to accommodate and deal with refugees in a humane manner while in each of our countries jobs, affordable housing and essential services are all lacking. The poison cocktail of social devastation, rising poverty and the refugee crisis have in recent years led almost everywhere to a strengthening of the extreme right, to an undermining of democracy and to a growing aversion to politics amongst very many people. On one point we quickly agree: opportunities for and threats to the left sit more closely side by side than ever before.

Around the left: the situation per country

One at a time those present gave a short run-down on the situation in their countries. During the meeting, the election results from Ireland were trickling in. The governing parties, which included Labour, had suffered an enormous blow at the hands of the voters, while the left nationalist Sinn Fein were amongst those making gains, rising from 10% to 14% of the poll. A further 11% went to parties which during the election campaign had condemned the austerity policies of the governing coalition and others. In Scandinavian countries too, the left was making significant gains almost everywhere, or at least holding their own, while in southern Europe the left was doing well in Portugal, Spain, Greece and Cyprus. This doesn’t apply to eastern Europe, where the modern left, in the wake of the fall of the Eastern Bloc, has nowhere been able to establish itself as a significant factor. And then there’s austerity. Nearly everywhere in Europe unemployment and poverty are on the increase. In wealthy Germany 15% of the population exists below the poverty line, while the woman representing the Cypriot party AKEL spoke of 150,000 jobless from a population of fewer than 1.2 million and the leader of the Finnish left party noted that government spending had been reduced by 8%. In Slovenia 15% of the working age population is out of work, while in Greece the figure is 25%. Life, for ever more Europeans, has during the last few years become a matter of survival.

In almost every country the social democratic movement finds itself in existential crisis. Whereas striving to cooperate with them remained an attractive prospect for many left parties in 2008, now things in a large number of countries look very different. In some instances, the Danish, Irish, German and Greek delegates reported, the social democrats had left their own supporters out in the cold by opting for the existing order; in others, in ever more countries they were having to pay the price for this as the voters presented the bill. Many of those in attendance warned of the risks for left parties when they become the trailer behind the vehicle of social democracy and argued for a form of independent, progressive coalition with social organisations such as trade unions and NGOs. Cooperating with the social democrats prior to an election is rarely a success. This doesn’t affect the fact that under certain circumstances you will have to work with them after an election in order to arrive at a workable progressive majority. In this regard the example was given of Portugal, where the modern socialist party Bloco de Esquerda (Left Bloc) has formed an anti-austerity government together with the social democrats and the communists.

That being part of a government does not represent the keys to paradise has been demonstrated in Iceland where our comrades of VG (the Red-Green Alliance) saved the country following its bankruptcy, but then lost the next election. The consolation prize was that in Iceland ten bankers are behind bars because they did irreparable damage to the country’s economy. How difficult it can be to govern we can see right now in Greece. While Tsipras’ government is working day and night to find a social route out of the crisis, efforts which are being thwarted by the IMF, the country is being disproportionately hit by the refugee crisis.

Something on which there is general agreement is that our countries must be rid of destructive austerity policies. Sectors which are important to people must be invested in, tax evasion must be tackled uncompromisingly. The rich must pay more taxes and our economies must be made more sustainable in the interest of future generations.

Read also:
Justice blind or blinded by titles? A tale of Prince Andrew and Julian Assange

The delegate from Greece’s Syriza, Yannis Bournos, issued a dramatic appeal: “Do something, enough theorising. Europe is doing nothing and letting Greece deal with tens of thousands of refugees.”

“There’s no refugee crisis but a crisis situation for refugees,” said Katja Kipping, chair of Germany’s Die Linke (The Left). “The only refugees whom you really have to be careful about are the tax refugees who put their capital in tax havens like the Netherlands,” said Nikolaj Villumsen from the Danish Red Green Alliance. Statements which fire the imagination but do little to address the fact that all of those present are extremely concerned about the influx of refugees and its consequences. The Slovenian delegate described the situation in a concise manner: “A year ago we managed to elect six comrades to parliament with our anti-corruption message and shortly afterwards we were, according to the polls, the most popular party in our country. I was – I tell you this in all honesty – extremely worried because the growth had been too rapid and as a party we could no longer keep up with it. But that fear turned out to be premature. The flow of refugees has in the last few months turned reality on its head in our country. Razor wire along our borders, militarisation of the police and a proposal to form armed civilian militias now determine the political agenda. Our major right-wing opponents now stand at 40% in the polls, while we have sunk to 10%. We have literally nothing to offer. We make analyses and can express these eloquently, but we can’t propose solutions because we aren’t at the centre of power.”

While several delegates spoke in relation to the refugees in terms of an enrichment of society and noted that they represented a solution to the problem of declining and ageing populations, others objected to this. They drew attention to the existence of an uneducated section of the existing population, one with few opportunities, and said that the sharing out of the refugees across Europe was completely skewed. SP leader Emile Roemer argued that big problems called for big solutions. In this he drew a distinction between the causes (the wars, global inequality), the solutions (ending the war, making progress towards fair trade, offering opportunities for development, investment in the social sector) and the organisation of people on the basis of their concrete interests (affordable housing, health care without marketisation). Tiny Kox, SP Senate leader and chair of United Left Group in the Parliamentary Assembly of the Council of Europe, added that refugees must not be confused with migrant workers. The first group must be received and accommodated until the war ends and they can go home. In this they must be able to count on our aid in reconstructing their devastated country.

We are of course in agreement over major principles, such as the importance of human dignity. Equality and solidarity – but on the concrete application of these principles we sometimes have differences of opinion. That concerns above all anything to do with the European Union. Should we be afraid if the British leave the Union, or that the EU will not succeed in dividing the refugees among the member states proportionately, of if on 6th April the Netherlands votes against? All of the delegates saw the EU’s policies as extremely damaging to the people of the member states. But are we doing the right thing in attributing the problems to the EU so readily? Some of those in attendance believe that this is certainly the case and emphasised that a crisis is sometimes necessary before something new and better can be brought about; others warned of the dangers of a crisis within the EU and argued for the Union’s reform.

At the close of the meeting all of the delegates stressed the importance of an open discussion. We agreed that we would meet again within a year. In addition, on a suggestion from Emile Roemer, we agreed that we would work on a collective declaration on the crisis and exchange information on poverty in our countries and how to address it. If it were up to the SP, we wouldn’t limit ourselves to the great European questions. but would also discuss party-building, recruitment, the establishing of branches and how campaigns might be won.

Hans van Heijningen is National Secretary of the SP. This report first appeared in the original Dutch in the SP monthly Spanning.