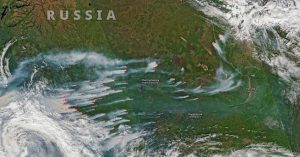 Carbon dioxide emitted by Arctic fires in June and July, according to one expert, “is getting close to 2017 fossil fuel CO2 emissions of Belgium.”

On the heels of several studies revealing that last month was the hottest June in recorded history, new satellite images show that wildfires in the Arctic Circle this month have reached what multiple experts have called “unprecedented” levels—elevating concerns about the planet-heating emissions produced by the blazes.

Thermal anomalies registered by #Aqua🛰️ and #Terra🛰️ #MODIS and #SuomiNPP🛰️ #VIIRS (all 21 July 2019) show hot spots in that area, further indicating that it is still smoldering/burning. Thanks to @jmccarty_geo for pointing it out to me! #RemoteSensing 2/2 pic.twitter.com/d5Cp88IiuM

Alaska, as Common Dreams reported earlier this month, is enduring an unusual heat wave that experts connected to the climate crisis. On July 4, the temperature in Anchorage soared to 90°F, an all-time record. This year alone, wildfires have already destroyed more than 1.6 million acres of land in the state.

In a piece last week that highlighted some of Markuse’s earlier images, Earther explained that the Siberian peatlands are “normally frozen or soggy.” However, “there are ample signs the peat dried out due to the heat and is ablaze. That’s worrisome since peat is rich in carbon, and fires can release it into the atmosphere as carbon dioxide.”

The carbon dioxide emitted by Arctic fires between the beginning of June and July 21, according to Parrington, “is getting close to 2017 fossil fuel CO2 emissions of Belgium.”

The July 11 statement from CAMS detailed six weeks of findings from tracking “over 100 intense and long-lived wildfires in the Arctic Circle.”

“In June alone, these fires emitted 50 megatons of carbon dioxide into the atmosphere, which is equivalent to Sweden’s total annual emissions. This is more than was released by Arctic fires in the same month between 2010 and 2018 put together,” the statement said. “Although wildfires are common in the northern hemisphere between May and October, the latitude and intensity of these fires, as well as the length of time that they have been burning for, has been particularly unusual.”

CAMS data from the past two decades shows that in the Arctic Circle specifically, fires are most common in July and August. As Parrington put it: “It is unusual to see fires of this scale and duration at such high latitudes in June… But temperatures in the Arctic have been increasing at a much faster rate than the global average, and warmer conditions encourage fires to grow and persist once they have been ignited.”

A landscape known more for its ice, this is the second time in the past three years a wildfire has ignited in western Greenland. There are very few historical precedents for these types of blazes, and though they’re not on the scale of what’s happening in Siberia and Alaska, they’re yet another symptom of an Arctic transitioning into a more volatile state as the planet warms.

Referencing research published in the past decade on the broader trend of more common and devastating fires in the coldest regions of the planet, Earther added, “the boreal forest that rings the northern portion of the world is witnessing a period of wildfire activity unseen in at least 10,000 years, and this summer is another worrying datapoint.”