Bulgarian President Rumen Radev used the first day of an official trip to Moscow on Monday (21 May) to try and resurrect plans for a pipeline that would bring gas directly from Russia to Bulgaria’s Black Sea coast, after it was cancelled in 2014.

Radev was initially received yesterday by Russian Prime Minister Dmitry Medvedev ahead of a meeting with Vladimir Putin today.

Radev, a former pilot of Russian MIG 29 jet fighters who is fluent in Russian and English, insists that as a NATO general his loyalty is with Bulgaria’s allies, but he also says he is in favour of dialogue with Russia.

Medvedev was quoted as saying that Russia is expecting Prime Minister Boyko Borissov to visit Russia soon and expressed hope that the intensity of official Russian-Bulgarian contacts will grow.

The Russian PM added that the peoples of both countries are connected by strong bonds of friendship and spiritual closeness. He also stressed the need to step up trade and economic cooperation, “because lately the trade between our two countries is unfortunately not growing but rather declining”. 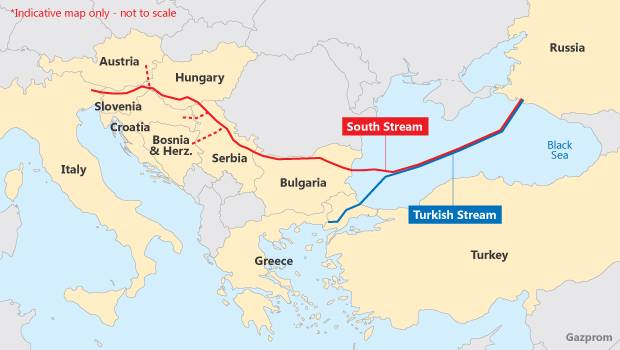 The president added that “security of energy supply is extremely important for both Bulgaria and the EU. I hope that our governments will also review the possibility of direct supply of gas from Russia through the Black Sea.”

Bulgaria hopes that the second pipe of the “Turkish Stream” pipeline network, under another name (possibly “Balkan” or “Bulgarian Stream”), will reach the Black Sea port of Varna, instead of the European territory of Turkey.

In an interview with Russian daily Kommersant published the same day, Radev said the Bulgarian request for “Bulgarian Stream” is no different from Germany’s request for “Nord Stream 2”, adding that both projects would be compatible with EU legislation.

In 2014, the Borissov government cancelled the South Stream pipeline project, which was designed to bring 63 bcm of Russian gas annually under the Black Sea.

There was indeed pressure from the European Commission to cancel the project, but this pressure was based on anti-competitive texts in the intergovernmental agreement, like promises that only Bulgarian, Russian and Greek firms would build the pipeline on Bulgarian territory.

Russia immediately turned to Turkey, replacing South Stream with a “Turkish Stream” project, under which a first pipe will bring Russian gas to the European territory of Turkey.

No decision has been made concerning the second pipe, and the possibility that it could reach Bulgaria still exists.

Radev said that in the recent weeks the Bulgarian government “has emerged from lethargy” with regard to energy projects with Russian participation.

“You know that there are already announcements for the restart of the Belene nuclear power plant [project], which implies Russian participation. The Minister of Energy was also in Russia, all this is commendable, but it is still inadequate,” Radev said.

Six years after he personally froze the construction of a second nuclear power plant in the Danube town of Belene, Borissov recently announced plans to resume the project.

This is a Global Pandemic – Let’s Treat it as Such

Berlin, the Banks and Coronavirus against South Europeans. Russia, China and...