The United States and Israel were the only countries that voted against UN General Assembly draft resolutions calling for a nuclear weapons-free Middle East, measures to stop an arms race in outer space, and an end to the blockade of Cuba.

Important breakthroughs have arrived at the United Nations seeking to prevent an arms race in outer space and create a nuclear weapons-free Middle East. There are just two main obstacles: the United States and Israel.

While Washington and corporate media outlets portray China and Russia as aggressive warmongering rogue states, their votes at the UN show which nations are actually expanding dangerous militarism into new frontiers.

China and Russia joined dozens of other countries in sponsoring resolutions at the UN General Assembly (UNGA) that sought to prevent armed conflict in space. Most of the international community supported these historic peace measures. The only consistent outliers were the US and Israel.

Beijing and Moscow have been leading global efforts to stop the use of weapons in space. Meanwhile, Washington has unilaterally blocked the international consensus on preventing the deadly space race.

Moreover, as nearly all UN member states have united in calling for a Middle East free of nuclear weapons, the US and Israel have singlehandedly undermined their peace efforts.

This roguish behavior predates the election of President Donald Trump.

At the UNGA on November 7, almost every country in the world also voted to end the US embargo against Cuba. This was the 28th year in row that the international community united in calling for the American noose to be taken off the neck of the Cuban people.

While 187 member states supported the resolution demanding an end to the blockade, the US, Israel, and Brazil’s far-right government were the lone nations to oppose it. American allies Colombia and Ukraine abstained.

Washington’s UN votes show who truly is a rogue state. 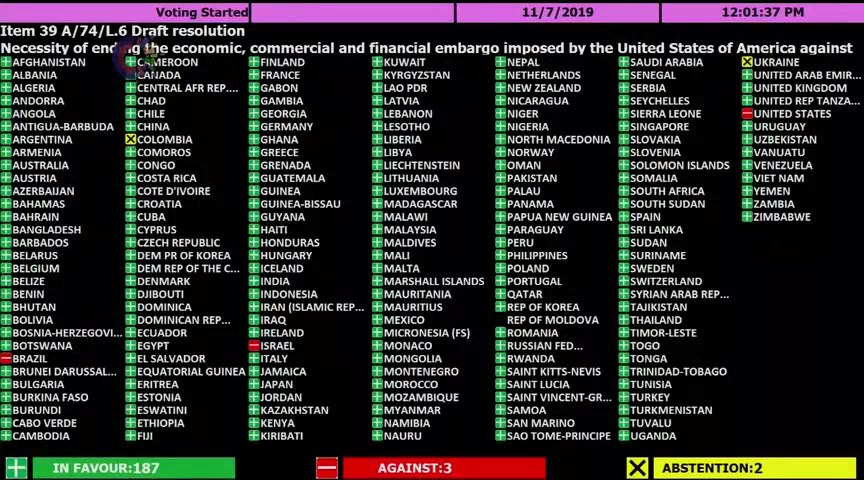 The UNGA’s First Committee, which oversees disarmament and international security, voted on November 1 to overwhelmingly approve a draft resolution entitled “Establishment of a nuclear-weapon-free zone in the region of the Middle East.”

Read also:
With Sanders surging in the polls, Israel lobby spends big bucks to sink his chances in Nevada

A staggering 172 countries voted in support of this resolution. Only two nations voted against it: the US and Israel. Just two more countries abstained: the United Kingdom and Cameroon.

At the same meeting, the First Committee approved a draft resolution on “The risk of nuclear proliferation in the Middle East,” which called for the region to abide by the Treaty on the Non-Proliferation of Nuclear Weapons (NPT).

Given Israel is the only country in the Middle East with nuclear weapons, the UNGA resolution called on Tel Aviv to join the NPT (Israel has long refused to sign the treaty), and demanded that Israeli nuclear facilities be overseen by International Atomic Energy Agency (IAEA) safeguards.

The draft resolution was also overwhelmingly approved, with 151 votes in support and a mere six votes against — from the US, Israel, and Canada, along with the tiny island nations of Palau, Micronesia, and the Marshall Islands, which function as vassals of Washington at the UN.

Once again, the United States and Israel stood alone against the entire international community.

One draft resolution was titled “Prevention of an arms race in outer space.” The measure was jointly introduced by 20 nations in the Global South, including China, Cuba, Bolivia, Algeria, Congo, and Syria.

All present UN member states, 175 nations, voted in support of this resolution. The only two that opposed it were, yet again, Washington and Tel Aviv.

The committee voted on another draft resolution advancing “further practical measures for the prevention of an arms race in outer space.” This was jointly introduced by 23 countries, including China, Russia, Venezuela, Cuba, Nicaragua, Bolivia, Iran, Algeria, Armenia, South Africa, and Syria.

The resolution passed with 124 vote in favor, with 41 votes against and 10 abstentions.

This passed with 123 votes in support, 14 votes in opposition, and 40 abstentions.

The vast majority of member states supported the resolution, with 166 votes in favor. Once more, the US and Israel were the only nations to vote against it. Another five US allies abstained: the UK, Australia, Ukraine, Georgia, and Palau.

While the United States actively tried to sabotage international attempts at arms control and demilitarization of space, Washington’s favorite bogeymen pushed for diplomacy and peace.

Beijing emphasized in a previous meeting of the First Committee on October 31 that China and Russia had jointly proposed a “treaty on the prevention of the placement of weapons in outer space, the threat or use of force against outer space objects.”

Moscow’s representative said at the meeting “that Western countries are actively promoting the concept of competition in space — while simultaneously suggesting that competition will lead to a crisis in which violence will be required.”

In the November 5 meeting, Russia’s representative argued that the “United States is trying to impose its rules and the idea of domination from outer space and could target objects under the excuse of combatting debris.”

Cuba pointed out that it was just one country — the US — that blocked a consensus in the UN Group of Governmental Exerts on “further effective measures for the prevention of an arms race in outer space.” Washington strongly opposed attempts to create a legally binding treaty that would prohibit the deployment of weapons in space.

Venezuela’s UN representative said “she regretted to highlight the destructive actions of certain countries that cause division and undermine progress while unilaterally proclaiming war‑like intentions in outer space.”

Syria’s call for a Middle East free of nuclear weapons

While the United States government and corporate media outlets portray Syria as a bloodthirsty rogue regime, Damascus helped lead calls for a nuclear-weapons-free zone in the Middle East, while Washington and Tel Aviv stood alone.

At the meeting, Syria voted for the draft resolution supporting the “establishment of a nuclear‑weapon‑free zone in the region of the Middle East.” Damascus’ representative emphasized that “Syria was among the first to call for a Middle East free of atomic bombs.”

“Israel will never accede to the Non‑Proliferation Treaty as long as the United States and others protect its related weapons programs,” the Syrian diplomat added.

While the US and Israel have accused Syria of using chemical weapons, Damascus shot back saying, “Israel possesses chemical weapons, has used biological and radiological arms against Palestine and Syria, and has facilitated related shipments to terrorists.”

“The use of weapons of mass destruction is reprehensible and immoral,” the Syrian representative added, reiterating his call for a region free of such weapons.

The UN is holding a meeting called the “Conference on the Establishment of a Middle East Zone Free of Nuclear Weapons and Other Weapons of Mass Destruction” in its headquarters in New York from November 18 to 22.

A majority of UN member states, 103, voted in favor of the conference, including China, Russia, and most of the Global South; while 71 countries abstained, including most Western countries.

Once again, just three countries voted against the anti-nuclear weapons conference: the US, Israel, and Micronesia.

* Ben Norton is a journalist, writer, and filmmaker. He is the assistant editor of The Grayzone, and the producer of the Moderate Rebels podcast, which he co-hosts with editor Max Blumenthal. His website is BenNorton.com and he tweets at @BenjaminNorton.