Finally, it’s over. Well, sort of, anyway. Late Sunday afternoon, Attorney General Bill Barr released his much-anticipated summary of Bob Mueller’s Russia investigation. The big news, of course, was that nobody in Trump’s orbit “knowingly” coordinated with Russian efforts to disrupt the 2016 election. Trump won’t be charged with obstruction of justice and not a single American was indicted for conspiracy.

To the delight of Russiagate skeptics, it was a complete vindication. To the dismay of the liberal establishment and MSDNC — who all cashed in on the chaos — it was an enormous letdown.

Much of the celebration, however, took on a twisted form. Matt Taibbi was the most contorted, writing in a column that, “WMD was a pimple compared to Russiagate. The sheer scale of the errors and exaggerations this time around dwarfs the last mess.”

There’s no question Russiagate was a colossal abstraction, but comparing Russia-mania to the WMD deception, which led to an illegal war that killed a half million people while germinating ISIS, was a depraved mischaracterization.

The Intercept‘s $500,000 man Glenn Greenwald wasn’t far behind Taibbi’s glee, exclaiming on Democracy Now! that the last two years was “the saddest media spectacle I’ve ever seen.” Like Taibbi, Greenwald appears to have a memory lapse, forgetting just how culpable mainstream media was in perpetuating the lies that led us into the bloody war on Iraq. Maybe we should cut him some slack. It could just be that Greenwald wasn’t keeping tabs on the media’s mishaps back then, as he never abandoned his “trust in the Bush administration,” and accepted Bush’s “judgment that American security really would be enhanced by the invasion of this sovereign country.”

Yes, Glenn, Russiagate was bad, but it didn’t lead us into an endless string of wars in the Middle East. Just a reminder, millions of us were ahead of the curve in opposing the fucking monstrosity and we never for a second bought Bush’s bullshit lies.

Read also:
Russia and the NYT Find a Point of Agreement – the Failed ‘Kosovo’ Experiment

Greenwald’s childish delight was also contradictory. The same report he glorified in exonerating Trump on collusion matters also found that Russia attempted to “conduct disinformation and social media operations” in an attempt to interfere with the 2016 election. A part of that effort, claims Mueller, was the hack of the Democratic Party by the Russian government that included caches of emails from John Podesta and the DNC, which were later handed over to Wikileaks and trusted journalists like Greenwald at The Intercept. As Barr’s summary notes:

“The Special Counsel found that Russian government actors successfully hacked into computers and obtained emails from persons affiliated with the Clinton campaign and Democratic Party organizations, and publicly disseminated those materials through various intermediaries, including Wikileaks.”

Let’s break it down. According to Mueller, Wikileaks along with Greenwald, were spoon-fed Democratic emails that were hacked by Russian operatives in the form of Guccifer 2.0 that were intended to damage Hillary Clinton and the Democrats. One doesn’t have to be a fan of Hillary to understand the motives and implications behind Russia’s alleged disruption campaign, but a transparent journalist, at least in hindsight, would be honest about their source’s motives as well as the timing of the dump, which happened at the same moment Trump’s p-grabbing tape from Access Hollywood hit the airwaves. Yet, Greenwald is cherishing the portion of Mueller’s report that claims there was no collusion while ignoring the Russian meddling charge, specifically his role in the matter. Don’t expect that to change. If Greenwald were to ponder whether or not Mueller’s team got it right on the DNC hack, it would throw the veracity of the whole report into question.

Read also:
US billionaire predicts civil war in the country 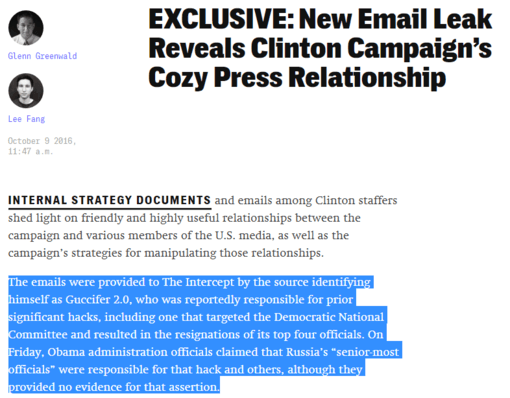 For the record, as many of our readers know, CounterPunch was also a target of alleged Russian interference in the form of the fictitious reporter Alice Donovan, who was directly named in Mueller’s July indictment. Donovan was accused by Mueller as having been the first persona to promote the DCLeaks project around social media. We published one story by Donovan during the election on cyber-warfare. Even though we were catfished, we were skeptical early on of the real intent of the Russia fixation and opted to reserve judgment on the Mueller report until it was wrapped up.

There’s no doubt Russiagate infected many liberal minds that obsessed over the prospect of Trump as a Russian agent beholden to Putin’s masculine appeal. The most pompous among them was Rachel Maddow, who, during a six-week stretch in 2017, covered Russiagate more than all other news topics combined. Maddow’s fear-mongering delirium only served as a 24/7 distraction to Trump’s much more tangible crimes. It was all by design, as Maddow’s sky-high ratings kept her show smoldering atop the stinky pile of cable news punditry.

Unfortunately, Russiagate isn’t likely to die a slow death. Wikileaks, who Mueller says played a role in disseminating the Democrats’ hacked emails, is still under investigation. The Julian Assange saga, whose indictment appears to be under seal, doesn’t look to be ending soon either. Chelsea Manning remains in solitary confinement for refusing a grand jury subpoena that’s tied to the Fed’s investigation of Assange. And on Monday, the Supreme Court decided it would not hear a challenge by an unknown foreign financial institution that’s fighting a Mueller subpoena. Then there is Michael Cohen’s ongoing cooperation and the dangling matters of Roger Stone and Michael Flynn.

The tentacles of the Mueller inquiry are likely to slither on for years in the form of probes by the Southern District of New York and others involving campaign finance and Trump Organization affairs. The House Judiciary Committee, the final arbiter on the question of impeachment, will continue its own investigation, utilizing its subpoena powers while pressing for the full release of the Mueller report, which the public deserves to untangle. In other words, the buck doesn’t stop with Bob Mueller and Bill Barr.

This administration has committed so many crimes, perpetrated so much destruction, it makes little difference if they “colluded” with Russia to influence the election or not, there is still much more fodder. Remember, Russia isn’t the real enemy. The entire bi-partisan establishment is.

* JOSHUA FRANK is managing editor of CounterPunch. His most recent book, co-authored with Jeffrey St. Clair, is Big Heat: Earth on the Brink. He can be reached at joshua@counterpunch.org. You can troll him on Twitter @joshua__frank.