There seems to be no limits to the propaganda war being waged by Western mainstream media.

Thomas Palley is an American economist who has served as the chief economist for the United States-China Economic and Security Review Commission. He is currently Schwartz Economic Growth Fellow at the New America Foundation 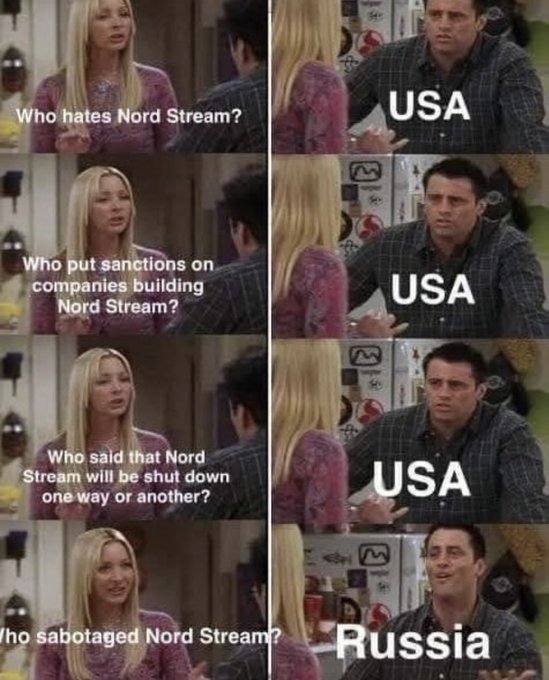 Imagine Moscow was nuked yesterday, and this morning The New York Times ran a frontpage headline “Moscow nuked: Russia proves its hostility to Europe again”. Sounds pretty crazy? Yet, in a manner of speaking, that is what happened last week.

The same take echoed in the UK. The conservative Telegraph newspaper ran a headline “Nord Stream sabotage mapped: how Putin could have carried out the attack” along with a photo of Vladimir Putin in a submersible. Meanwhile, the progressive Guardian ran a headline about a “new phase of hybrid war” against Europe with the sub-title accusing Russia of suspected sabotage.

The Nord Stream system is a Russian majority owned project, and it is a critical asset for both Russia and Germany. It was in shutdown mode owing to sanctions, and the attack may have damaged it beyond repair as saltwater inflow promises to quickly corrode the pipes. The attack has also caused an environmental disaster via massive release of climate damaging methane gas stored within the 1,200-kilometer system.

For Germany, Nord Stream has been a major reliable source of cheap gas that provides both energy for its economy and feedstock for its important chemical industry. The shutdown had already inflicted huge economic costs via energy price inflation and supply shortages. If the system has been irreparably damaged, Germany will suffer permanent major economic injury.

For Russia, Nord Stream is both an economic and geopolitical asset. Regarding economics, it is an important source of exports and foreign exchange earnings. Regarding geopolitics, it provides Russia with leverage over Germany. It also by-passes the nexus of pipelines (Brotherhood, Soyuz, and Yamal) that cross Ukraine.

Answering the “Whodunnit?” question turns on capability and motive

Ukraine is another suspect. It has the motive as destroying the pipeline weakens Russia, while strengthening Ukraine which acquires pipeline leverage over both Russia and Germany. However, Ukraine lacks the capability and has no Baltic Sea access.

Poland, Sweden, and Denmark are also suspects. They all have the technical capability and are all Baltic Sea countries located close to the explosions.

Regarding motive, Poland has extreme animus to Russia and has persistently argued for ratcheting up support of Ukraine, even calling for direct NATO involvement. However, it is increasingly allied with and answerable to the US which is making Poland the fulcrum of its Eastern European military deployment. That means Poland would not act without US approval.

Despite its progressive reputation, Sweden has a powerul right-wing anti-Russian constituency, especially within its military. However, Sweden is in the process of joining NATO, while Denmark is a loyal NATO team player. Consequently, it is a huge stretch to think either would unilaterally attack an asset so important to Germany.

The final suspect is the US which has both capability and motive. Long before the Ukraine conflict, the US opposed the Nord Stream 2 pipeline and used its full diplomatic muscle to prevent it going into service. The reasoning was the pipeline strengthened Russia economically and gave it leverage over Germany. It also made US gas irrelevant for Europe’s energy picture.

At this stage, the US is the huge winner from the Nord Stream attack. In one blow, it has economically damaged Russia, reduced Russian leverage over Germany, and reduced Germany’s incentive to engage with Russia.

Read also:
Bombing a parliament with US support to open the way to privatization/piratization

Furthermore, the attack has reversed the prior dynamic by tilting Germany toward dependency on US liquid natural gas exports. Consequently, the US economy stands to gain, as does the powerful Texas energy sector, while the US government has gained power over Germany.

The US motive is clear. As documented on the Moon of Alabama website run by a former German military official, there is also an admission and smoking gun.

In an extraordinary interview on ABC News (February 7th, 2022) President Biden explicitly spoke about destroying the Nord Stream system. The video link is here.  The text is as follows:

Pres. Biden: “If Russia invades…then there will be no longer a Nord Stream 2. We will bring an end to it.”
Reporter: “But how will you do that, exactly, since…the project is in Germany’s control?”
Pres. Biden: “I promise you, we will be able to do that.”

The smoking gun is a US naval presence at the explosion site just prior to the explosion. On 28 September a US fleet sailed west through the Fehmarnbelt passage near the explosion site. The fleet included the amphibious assault ship USS Kearsarge and the landing ships USS Arlington and USS Gunston Hall. The Kearsarge is equipped with state-of-the-art unmanned underwater vehicle mine hunting technology, and it had tested sub-sea mine destruction while in the Baltic. Days before the explosion, the Kearsarge was identified as being thirty kilometers away from the explosion site.

Putting the pieces together, reason and evidence point to the US being the attacker. The motive is strong, the circumstantial evidence is powerful, and there is no other plausible suspect.

The attack on the Nord Stream pipelines is one of those moments when the fog of war suddenly lifts, allowing one to see the reality (if willing to look).

1. The attack on Nord Stream is an attack on Germany, which is a major European ally. It speaks to the impunity with which the US now acts.

2. The US attack on Russia’s sub-sea assets risks retaliation against US and Western sub-sea assets. That opens another pathway to nuclear conflict, supplementing the existing pathway via the battlefields of Ukraine.

3. The press coverage speaks volumes about the state of our media. We are talking about the elite media. The coverage is shocking in its egregious intentional deception: the press narrative simply does not compute. It will likely be slightly walked back for reputation-saving purposes. However, the dishonest goal has been acheived and the damage done as walk-backs are partial and buried, whereas frontpage stories create understandings that endure.

The Nord Stream deception fits the larger pattern of reporting that has afflicted coverage of the Ukraine conflict from Day 1, beginning with the causes of the conflict. That deceptive pattern has been visible in the reporting of events such as the Odessa harbor mining, the shelling of the Zaporizhzhia nuclear plant, and the Mariupol attrocities.

Why the media has behaved that way and our own willingness to embrace its deceptions is food for thought.

4. Lastly, the attack inflicts grave injury on Germany, which is starting to get the economic and political bill for its capitulation to the US Neocon game plan for Ukraine. That is Act II of the Ukraine conflict and it has only just begun. The outlook for Europe is not good.