Historical, Social and Spatial Frame of the Community of Squatted Prosfygika

The building complex of Prosfygika was built in 1933 in order to house the refugees of Minor Asia. Due to these conditions, an alive working class neighborhood with communal characteristics arose. The antifascist partisans of 1944 used Prosfygika as a shelter against the British and Greek state-armies, the gunshots are still visible on the facades of the buildings while the monument of the guerillas located in the forefront of the neighborhood is reminding it to us everyday. Today, Prosfygika is one of the biggest building complexes in the center of Athens which is still not gentrified and exploited by the big funds or the state. It’s a place with a strategical significance because is located in-between the two ‘pillars’ of authority – the Supreme Court on one hand and the Police Headquarters on the other hand.

Within this social-spatial frame, some militants who were already living in the neighborhood, as squatters, decided to organize themselves. In 2010, they initiated the Community of Squatted Prosfygika, having as a central decisional political organ SY.KA.PRO, the Assembly of Squatted Prosfygika. A communal body for everyday life and political struggle.

10 years later, the project has as a result a politically unified neighborhood, numerous squatted apartments, autonomous communal structures covering the needs of dozens of people, a constant participation to local and international struggles and a great revolutionary perspective.

We are launching this crowdfunding campaign for all the needs such a project has.

The Needs Of The Struggle

As SY.KA.PRO, we are participating to the local struggles of the anarchist and the wider radical movement within the greek territory. During the last years, we have participated in several struggles for prisoners such as Dimitris Koufontinas hunger strike, in which together with dozens of other comrades, our members were arrested in massive interventions. We stand by the radical student movement which is constantly trying to claim spaces for struggle within universities having as a core the participation to the squatting of Polytechnic University – a symbol of resistance against dictatorship. We have been involved in many anti-repression struggles for solidarity to other squats and comrades and we defend actively Exarchia neighborhood from repression and gentrification.

Moreover, our comrades have travelled to support through an internationalist perspective the social revolution of the Kurdish Freedom Movement known as “Rojava” counting one martyr Haukur Hilmarsson “Spark”. At the same time, our internationalist perspective and solidarity is including the hosting of Turkish and Kurdish revolutionary organizations and their political refugees in the structures of the community. Also, comrades from all around the globe are visiting or organizing within our community. Of course, these relations are including solidarity to projects abroad having as one of the most prominent examples to be Rigaer94 in Berlin.

For our informative events and actions, for our struggle on the streets and conflicts we are asking for financial resources in order to be able to continue creating and sharing posters, texts, banners, to equip ourselves with tools of resistance such as gasmasks, helmets, sticks, materials for barricading the buildings and other defense supplies but also for court expenses.

The Needs Of The Structures

We perceive our structures among the communities’ great achievements that’s why we are asking for economical support.

The femininities of our community have an autonomous organization with their own procedures and spaces. Τheir targets are:

From the legal procedures – trials and documents – of the femininities to the street struggles and informative events, the Womens’ Cafe requires economical support for all the kind of needs.

The children house and self-education structure is an autonomous structure taking care of the education and entertainment of community’s kids – and not only – covering even the needs of them for their formal school education. Textbooks, writing materials, games, food and construction materials for upgrading the place that the kids’house is hosted are some of the regular needs.

The Collective Bakery structure is producing bread and lahmajun on a weekly basis for the community but also for other people, self-organized open markets and cooperative shops, in order to receive some minimum income. We are in a process of upgrading our bakery structure, by refurbishing the infrastructure and its equipment in order to increase our production and upgrade its functionality.

In the front block, located on Alexandra’s avenue, our community operates a recently formed social center in order to increase visibility and accessibility to the public. Also, we are estimating that this building will be the first target of state-repression. The social center it’s an open structure in which groups, collectives and projects can co-organize with the community. At the same time, is hosting our assemblies, various events and the meetings of several collectives that we are cooperating such as a psychologist group known as Initiative Ψ and a group of architects. In the social center there is a public library structure with books from movements publishers. Our target is to gather books in several languages spoken in the neighborhood such as Arabic, Farsi, Bulgarian, Turkish among others and upgrade the facilities of the social center. 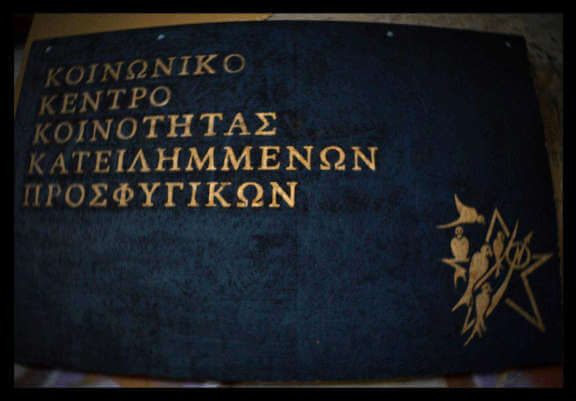 Solving health issues is a common task in our community, due to the multiple fragile social groups that inhabit within our neighborhood. For this reason, we are connected with social-medical centers. Beyond finding and gathering medicines and basic medical supplies to use and distribute for free, we are at the meantime trying to cover medical expenses. Our long term objective is to create our own health center and a structure to produce natural medicine.

Our neighborhood is mainly composed by people who are not in condition to work, either because they are very old, either because they don’t have the right papers, so there is a high need for free food gain. This need is covered in several ways. Our central source is the free food given to us from the local street markets. Beyond the distribution to the inhabitants, a part of the food is used for the social kitchen which happens on a weekly basis. But this is not enough. The free market is providing to the community vegetables and fruits but the needs of the people are going much further. Products like oil, pasta, rice, legumes must be found in other ways, with the responsibility of the food logistic structure and of course any product resource or financial support are helpful.

Access to internet is very important for our people in order to to get informed and use digital tools. Lately, we managed to establish internet in almost every building block of the community. Our target is every house to have internet access.

89 years after their construction, the buildings of Prosfygika are facing problems of decay. Many houses have been abandoned for years and they are in need of major construction works, including new sewage, water and electricity system installations. In some cases, the construction problems is concerning a whole building or a whole block of flats. One of the main big scale issue that we want to solve in the upcoming period, is the absence of electricity grounding in most of the blocks. Plus to this, the external walls and especially the balconies are in bad condition and are falling apart and most of the rooftops are in need of water proofing and insulation. The last big project we complete was gaining a machinery for cleaning the old and problematic sewage disposal structure. We achieve this through a solidarity campaign settled by our comrades of Rigaer94. Apart from this, we still have many works to implement and conservation is also an every day need. These are the biggest and most expensive needs which we are addressing for support from solidarity sources.

As community, we are facing a huge bet. Our independence from the state and the companies. Ιt is, though, depending on people and projects beyond our community, which their solidarity has help us to reach the level of the community we have now, more than ten years since it began. And now, one more time, we call people of the international movement, people with progressive ideas, to support us financially or by any other way, including of course visiting us to get to know our project and if it is possible to offer technical knowledge and work.

Read also:
Shame of Europe | A poem by Günter Grass

Last But Not Least

Our neighborhood and its buildings are very high on the target list of gentrification companies and the municipality of Athens. But, these buildings are our ground and the shelter of our community of life and struggle. Against the odds, we took the decision to stay and defend our ground and our community in every possible way when the repression comes and it won’t be the first time we will do it.

At 2016 our neighborhood was under a constant siege from fascists and police. Almost on a weekly base, Golden Dawn, the biggest fascist party in Greece, had a court case in the adjacent Supreme Court. A lot of fascists and riot cops were gathering around and inside our neighborhood. Our target back then was to break the siege, which practically meant to displace the entrance of the fascist into the court as well as their supporters gathering place. At 31st of October an organized invasion of fascists and cops happened inside our neighborhood with had as a result the beating and arrestation of two comrades. We answered back to that with many hours of conflicts against the antiriot units, with physical contact fights and some cops injuries. The conflicts continued the next day in a lower scale. After this, the state decided to send the nazis to the opposite side of the Supreme Courts breaking in this way the siege. Our achievement became our lighthouse and an example of a way to defend squats and neighborhoods. Whenever it is necessary, we will have the same stance and we are calling people to support this fight.