June is the month of the birth of Sukarno (the first president of the Republic of Indonesia, June 6, 1901), the month of the formulation of Pancasila (the philosophical foundation of the Nation-State Indonesia, June 1, 1945), and the month of Sukarno’s passing away (June 21, 1970). This is why June is commemorated in Indonesia as the Month of Sukarno. This year 2022, the commemoration of Sukarno’s month resonates in France, especially Paris, city of revolution, of universities, of students, of artists, of writers, of cultures, of diversity, of museums, of business professionals, of luxury, of romantic lovers… city which Sukarno himself visited three times to meet the General President De Gaulle. The message of Indonesian motto Bhinneka Tunggal Ika (Unity in Diversity) fits very well with this cosmopolitan city.

Coincidentally, the first face to face meeting between Sukarno and De Gaulle happened also in June, more precisely on June 21, 1963. Prior to the meeting, the relationship between France and Indonesia was tense due to the Indonesian stand supporting the struggle of North Africa, especially Algeria, against French colonialism and for independence. The tentative of Sukarno to see in person the general-president since 1960 did not succeed. Only in 1963, after the independence of Algeria in 1962, that De Gaulle accepted the first visit of Sukarno to his palace. They did not talk about Algeria anymore, but about the possible economic cooperation between the two countries they represented respectively. The second meeting between the two presidents took place also in Elysee on October 20, 1964. This time they talked about Cold War geopolitic, especially in Southeast Asia, where Indonesia was in confrontation with Malaysia. In Sukarno’s view, the Federation of Malaysia annexing North Borneo as a part of the federation was a project of British imperialism to contain Indonesia and China. Indonesia attacked Malaysia in order to foil the British project (this reminds us to the Russian attack to Ukraine in order to foil the US-NATO’s project). The third face to face presidential conversation occurred on July 3, 1965. They plunged fully in the Cold War issues, especially the American war in Vietnam. Sukarno and De Gaulle shared the same vision that the USA should get out from Vietnam and De Gaulle was strongly convinced that the USA would never win their war in Vietnam (Source: French Diplomatic Archives).

It seems that June is also the month of international trips for Sukarno. Several of his trips were done in June: Italy (June 1956), Mexico (June 1959), China (June 1960), URSS (June 1961), France (June 1963), Egypt (June 1965). Interestingly, he passed his 60th anniversary in Moscow. At the invitation of the Supreme Council and the Government of URSS, Sukarno was in URSS on June 5-12, 1961. He visited Moscow, Leningrad and Kronstadt. He met people, workers, farmers, the “Kolkhozians”, intelligentsia and the Soviet Armed Forces. Everywhere he passed, he was welcomed by the crowd warmly. Coincidentally, he was in Moscow on June 6, 1961. It is on that day that Kroutschev, Brejnev, Ignatov, Kozlov, Mikoyan, Moukhitidinov, Souslov and other Soviet leaders congratulated Sukarno warmly and cordially for his 60th anniversary (Source: French Diplomatic Archives).

At the initiative of the collectives of scholars and activists of social and solidarity movements named “Nations Emergentes” (Emerging Nations) and “Bandung Spirit Network” based in Paris, in collaboration with the ANRI (National Archives of the Republic of Indonesia) and the UNESCO programme of MOW (Memory of the World), under the auspices of the Mayor of Paris 6, with the support of the Embassy of the Republic of Indonesia in France, in the framework of cultural programme of the Paris 6 Townhall, an exhibition of Sukarno’s photos is organised under the theme of “SUKARNO LE VISIONNAIRE” (The Visionary Sukarno) at the centre of Paris where book shops of arts and literatures are situated, more precisely at the prestigious Gallery Luxembourg inside the Paris 6 Townhall, from Juni 24 to July 11, 2022.

The exhibition is aimed at making known to French public Sukarno’s role in global history and his contribution to the Indonesian nation-building as well as to world peace. As it takes place in June, the exhibition puts forward the life of Sukarno and his essential work: Indonesian philosophical foundation Pancasila (5 principles: Faith in Unique God – Humanity – National Unity – Democracy – Social Justice) and motto Bhinneka Tunggal Ika (Unity in Diversity). The photos are selected among the key episodes of Sukarno’s life, especially The 1955 Bandung Asian-African Conference and the 1961 Belgrade Non-Alignment Conference. The remaining photos are presented chronologically following his biography. 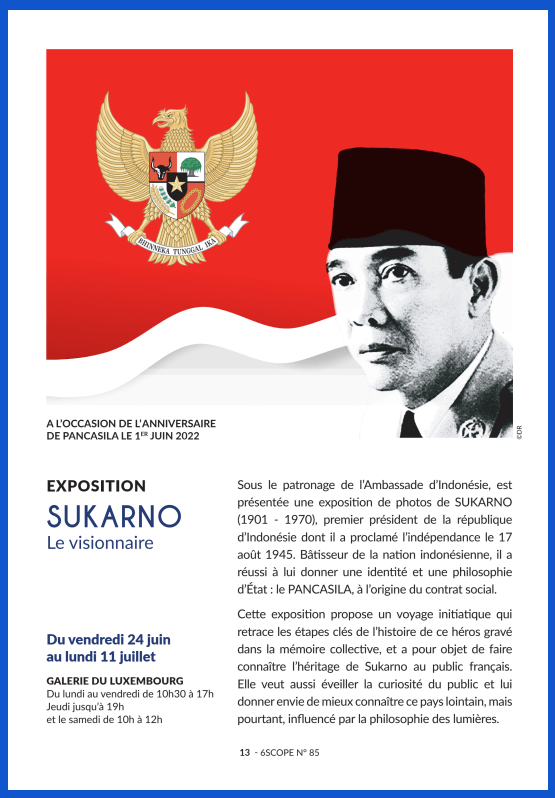 In Surabaya and Blitar, East Java, Sukarno as a child, his parents, his primary school, his passion for shadow puppet theatre, Mahabharata whose name “Karno” was a part of the epic…

In Surabaya, his secondary school, his first political apprenticeship with his guru Tjokroaminoto (founder and leader of the biggest political party in Southeast Asia before the WWI), his experiences with colonial racism, his daily meetings and debates with young activists from the movement for independent Indonesia (both communists and Islamists), his encounter with Marxism and a whole revolutionary literature, his awareness of the dominated, colonized, exploited, humiliated people…

In Bandung Technical School, prolific and brilliant writer, orator adored by the popular masses, founder and leader of the student movement, thinker and political actor, his first synthesis of “Nationalism, Islam and Marxism” in 1926…

Architect-Engineer, leader of the national liberation movement and for independent Indonesia, founder of the political party (Partai Nasional Indonesia, 1927), orator who galvanized the masses, beginning of life in prison, author in prison of a manifesto “Indonesia Menggugat” (Indonesia Accuses) which became the embryo of the conception of the modern nation-state independent and sovereign Indonesia…

Sukarno was put in jail several times by the Dutch colonial government and sent to exile in Flores and in Sumatra.

Liberated from prisons and exiles thank to the Japanese arrival, taking advantage of Japanese occupation to advance the project of Indonesian independence.

The first gathering of newly independent nation-states from Africa and Asia outside the control of the former colonial powers, outside the Eastern and Western Blocs, embryo of the Non-Aligned Movement founded six years later in Belgrade, the start of Sukarno’s international role…

1960: SPEECH AT THE UN GENERAL ASSEMBLY.

Sukarno among the leaders of the Non-Aligned Countries in the Belgrade Conference.

Bloody military take over backed by the West (notably the USA and the UK), the overthrow of Sukarno, the seizure of power by Suharto…

Sukarno under house arrest until his passing away.

The rise of Joko Widodo as President of Indonesia and his political party the Partai Demokratik Indonesia Perjuangan (Indonesian Democratic Party Struggle), which is the continuation of PNI (Indonesian Nasional Party) founded by Sukarno in 1927, marked the come back of Sukarno in the political direction of Indonesia.

The exhibition was organised by “Nations Emergentes” (https://nations-emergentes.org/) and “Bandung Spirit Network” (https://bandungspirit.org/) under the scientific supervision of Darwis Khudori (Architect, Historian, Professor of Oriental Studies, Director of Master’s Degree in Exchanges with Asia, Researcher at Group of Research on Identities and Cultures, University Le Havre Normandy, France, initiator and coordinator of Bandung Spirit Network).