That’s the conclusion from recent reports about the origins of a right-wing plot against liberal Jewish billionaire George Soros.

The demonization of Soros – often in overtly anti-Semitic terms – has become a leading theme of the international right in recent years.

And two of Israeli Prime Minister Benjamin Netanyahu’s key advisers were responsible for it.

In a Swiss magazine interview in January, electoral strategist George Birnbaum revealed that he and his mentor Arthur Finkelstein originated the plot against Soros.

Far-right websites like Breitbart typically describe Soros as a “globalist” – a euphemism echoing Henry Ford’s propaganda about “the international Jew” and later Nazi propaganda about a global Jewish conspiracy against the German “master race.”

According to the interview, the plot’s origins go back to 2008, when Orbán decided to seek reelection after some years in opposition.

Soros, a Hungarian-born American, was only 14 when Nazi Germany surrendered in 1945. He and his family only survived the Holocaust by disguising their Jewish roots.

He later made his fortune speculating on financial markets.

Soros has put more than $30 billion into his Open Society Foundations, which fund anti-communist and liberal causes.

Although right-wing conspiracies about Soros existed for years, it took an orchestrated campaign by Netanyahu’s advisers, working for Orbán, to send it into overdrive.

According to the interview with Birnbaum, in a January edition of Das Magazin – translated and updated at BuzzFeed News – the duo advised Orbán to focus on smearing Soros as the “puppet master” responsible for aiding Hungary’s enemies – “encroaching Islam and secular forces.”

Orbán began implementing the strategy in 2013.

A government-aligned newspaper ran a story attacking Soros for allegedly giving half a billion dollars to anti-Orbán groups.

The campaign escalated to police harassment and smear campaigns against supposedly Soros-controlled groups, and speeches by Orbán himself against the liberal Jewish financier.

In 2015, “Orbán made a speech in which he claimed Soros wanted to weaken the country and flood it with refugees,” the interview explains.

In 2017, the campaign peaked with open incitement against Soros.

Election posters for Orbán’s ruling Fidesz party prominently featured a smiling portrait of the billionaire with the slogan “Don’t let George Soros have the last laugh.”

According to the interview in BuzzFeed News, the propaganda worked: “A huge part of the country turned against Soros. Orbán won in 2014 and 2018, both times with an overwhelming majority.”

Read also:
Yes, Netanyahu’s Iran Policy Has Failed and Tehran Will Strike Back

To maintain his majority, Orbán needed to energize his base.

“It always helps rally the troops and rally a population” when the enemy has a face,” Birnbaum explains.

In a country with a lengthy anti-Semitic history like Hungary – the collaborationist wartime government of Miklós Horthy deported almost half a million Hungarian Jews to their deaths in Hitler’s camps – it’s not hard to see why the duo settled on a wealthy, liberal, Jewish figure like Soros as public enemy number one.

Birnbaum now claims not to have known at the time that Soros was Jewish, although he admits “it looks really bad.”

But Birnbaum still defends the campaign. “Anti-Semitism is something eternal, indelible,” he states. “I would do it again.”

Prominent US Republican electoral consultants, Finkelstein and Birnbaum worked with Netanyahu for years.

The duo helped Netanyahu win the Israeli prime ministership for the first time in 1996.

Birnbaum later worked as Netanyahu’s “chief of staff,” coordinating his media appearances after he lost office in 1999.

The New York Times recently described Birnbaum as maintaining “a network of contacts with current and former Israeli security officials.”

While Israel purports to protect Jews all over the world, Netanyahu’s ties with Orbán have only deepened as the Hungarian leader has revealed himself to be ever more openly anti-Semitic.

Netanyahu went as far as to rebuke the Israeli ambassador in Budapest for a statement expressing mild concern over Orbán’s anti-Jewish racism.

On Netanyahu’s orders, the foreign ministry retracted the statement and issued a new one claiming that Soros “continuously undermines” Israel.

Similar to Orbán, Netanyahu has attacked Soros as a backer of Israel’s enemies.

Last year, the Israeli prime minister posted on Facebook a false story that Soros was working with Iran. 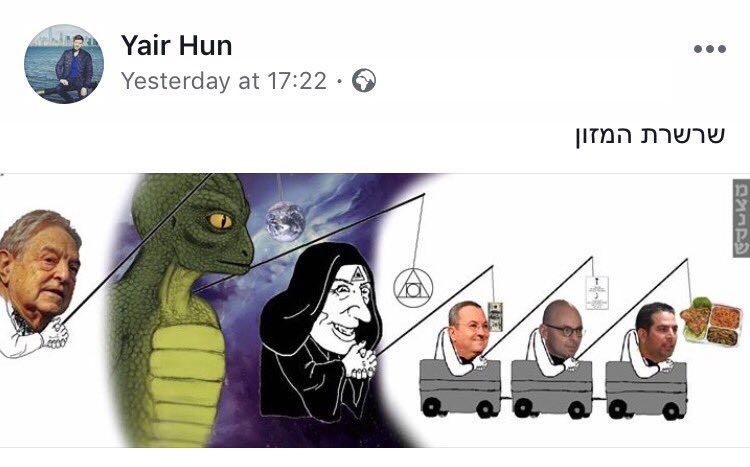 In 2017, Netanyahu’s son Yair posted a virulently anti-Semitic meme on social media, depicting Soros as leader of a global Jewish conspiracy to attack his father and Israel.

For this, the younger Netanyahu drew praise from white supremacists and neo-Nazis including David Duke and Andrew Anglin, the editor of the website Daily Stormer.

But spreading anti-Semitism did Yair Netanyahu no harm; the prime minister’s son was hired as social media manager for Shurat HaDin – an organization with close ties to the Mossad spy agency – which uses lawsuits to harass critics of Israel, a tactic known as lawfare.

More recently, Yair Netanyahu re-shared a tweet by prominent Islamophobic bigot Pamela Geller claiming that Soros-backed groups were leading the “BDS war” on Israel – a reference to the boycott, divestment and sanctions movement which calls for Palestinian equality.

Right–wing and anti-Palestinian websites habitually smear the BDS movement as a Jewish conspiracy funded by Soros. 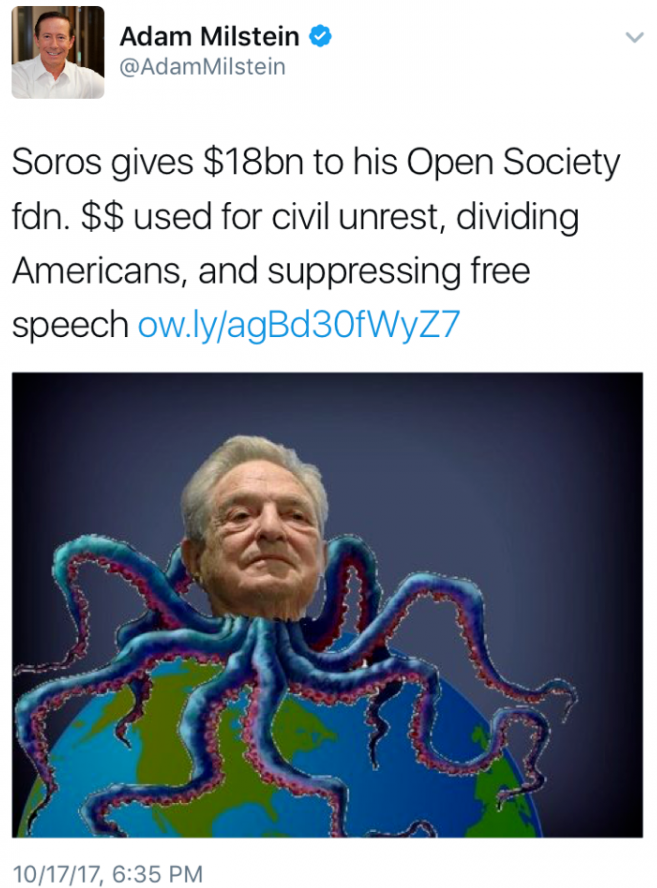 In 2015, a government-funded group of Israeli settlers created an openly anti-Semitic cartoon video in which a big-nosed character called only “Ze Jew” was paid by a shadowy puppet master to promote the BDS movement.

The left-wing Israeli publication +972 Magazine described it as possibly “the most anti-Semitic Israeli cartoon ever made.”

Such anti-Semitic incitement has resulted in efforts to change Israeli law.

In 2017, one lawmaker from Netanyahu’s party put forward a “Soros bill” which to make it harder for foreign entities to donate to human rights groups – similar to the recently passed “Stop Soros” law in Hungary.

This phenomenon, which could accurately be termed Zionist anti-Semitism, is part of the reason that Israeli dissident and BDS activist Ronnie Barkan says that Israel is “the greatest anti-Semitic force in the world today.”

“Every single Israeli representative around the world today says, if you are critical of the state of Israel – the criminal, occupying, apartheid state of Israel – you must also be anti-Semitic. They insist on conflating Zionism and Judaism all the time.”

It may be counterintuitive, but present political reality is that there is a top-level alliance between Israel and anti-Semitic forces.

One of the most dangerously anti-Semitic groups in the world is Ukraine’s Azov Battalion – a neo-Nazi militia that has been incorporated into state security forces.

Its founder once wrote that the “historic mission” of Ukraine is “to lead the white races of the world in a final crusade for their survival. A crusade against the Semite-led untermenschen.”

This same group is being armed, trained and supported by Israel, and its friends in Canada’s Liberal government, as well as Donald Trump’s United States.

Trump has personally encouraged the smears against Soros.

In October, he tweeted without offering evidence that women protesting Supreme Court nominee Brett Kavanaugh, who had been accused of sexual assault, had been “paid for by Soros.”

The very rude elevator screamers are paid professionals only looking to make Senators look bad. Don’t fall for it! Also, look at all of the professionally made identical signs. Paid for by Soros and others. These are not signs made in the basement from love! #Troublemakers

Trump’s 2016 campaign was criticized for dog whistle anti-Semitism after an ad targeted Soros and other Jewish figures as representing “global special interests.”

Since the election, the clique around Trump has spearheaded an open alliance between Zionism and white supremacy, in which Israel serves as the model for a modern ultra-nationalist state.

This circle has included Sebastian Gorka, a Trump adviser who was a member of an anti-Semitic Hungarian ultra-nationalist group previously controlled by the Nazis.

After leaving his White House post in 2017, Gorka was welcomed at the gala of the Zionist Organization of America, a leading Israel lobby group.

Yet while allying with actual anti-Semites and far-right extremists from Washington to Hungary to Ukraine, the Israeli prime minister claimed last month that “the new form of anti-Semitism is anti-Zionism.”

This bogus claim, which is being echoed by Netanyahu allies such as France’s President Emmanuel Macron, is designed for one purpose: to stigmatize and marginalize opposition to Israeli occupation and apartheid against Palestinians.

The claim that anti-Zionism is anti-Semitism is an attempt to smear anti-racists as racist – as seen in the UK’s Labour Party over the last few years.

But for the establishment, anti-Semitism gets a pass – as long as modern-day anti-Semites also profess support for Israel.

There is perhaps no starker example of Zionist anti-Semitism at work than how two Netanyahu advisers orchestrated a Nazi-style smear campaign against a Hungarian Holocaust survivor.