New York Times says alleged hits on missile base, centrifuge facility earlier in year were discussed with US; Israel worried Washington will stop it taking action if new deal made

Israel consulted with the United States before carrying out covert strikes on an Iranian nuclear facility and a missile base earlier this year, the New York Times reported Saturday, as tensions rise between the two allies over Washington’s desire to make a deal with Tehran.

Israel spoke with the US ahead of a strike in September against a missile base, and one in June on a facility which made components for machines used to enrich uranium, sources told the newspaper.

Israeli allegedly hit a secret missile base belonging to the Islamic Revolutionary Guard Corps in September and in June was said to have targeted a facility in Karaj used in the construction of centrifuges needed to enrich uranium.

Saturday’s report said that in the wake of the consultations, the White House praised Prime Minister Naftali Bennett’s government “for being far more transparent with it” than former premier Benjamin Netanyahu had been.

The New York Times report was based on conversations with more than a dozen American and Israeli officials. Israel has not publicly accepted responsibility for either of the strikes. 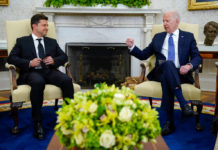