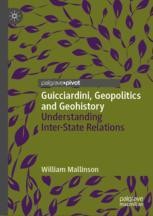 “An amazing counterblast to geopolitics and the realist school of international relations.” –  Professor Vassilis K. Fouskas, School of Business & Law, University of East London and founding editor, Journal of Balkan and Near Eastern Studies (Routledge)
“William Mallinson goes beyond the stereotypes and proposes a fresh and critical look at international relations and its theories: a powerful and thoughtful book based on deep analysis of how history and human nature shape relations between states. A long needed new angle in IR.” – Pavel Kanevskiy, Professor of Political Science, Associate Dean, Faculty of Sociology, Lomonosov Moscow State University
“Professor Mallinson has written a highly intellectual book on Guiccardini that sheds light on geohistory and the rôle of human behaviour in the constant repetition of historical events, distinguished only by new names and colours. Mention of events from Greek history is of particular interest to Greeks and historians of the region. Finally, this book is too intellectual for most politicians, who may become wiser by reading, but lack the mental facilities to understand.”

This book demonstrates that geohistory is a more effective concept than geopolitics in understanding inter-state relations, at a time of considerable confusion in world affairs, and that Francesco Guicciardini’s thoughts are an efficient medium to demonstrate not only the inadequacies of geopolitics, but that a geohistorical approach can be a more responsible way of understanding international affairs. The book introduces a fresh approach, based on the individual, on which corporate characteristics and behaviour depend, often in the shape of state interests, which are unable on their own to predict actions driven by human behaviour. The book shows how show mainstream international relations theories are stuck in paradigms, inadequate in explaining why world politics is moving in a direction that nobody could predict even a decade ago. It shows how ideology can blur clear understanding. In short, it represents a new and intellectually refreshing approach and method in understanding, and tackling, the vagaries of relations between states.

Chapter 1. Explanation
This chapter provides the reader with a foretaste of what is to come. It introduces the reader to Guicciardini and his Ricordi, juxtaposing him with Machiavelli, and explaining how the former will be the main vehicle to help to understand relations between states. It will suggest that geopolitics is inadequate in gaining a deep understanding of inter-state relations. The chapter introduces the term ‘geohistory’, with its emphasis on the immutability of human nature and characteristics, and advocates the importance of detaching oneself from ideology and ‘conceptual frameworks’, and of scrutinising documents.

Chapter 2. Who Is Guicciardini?
The chapter will give an overview of Guicciardini, differentiating him from Machiavelli, and connecting some of his thinking to Thucydides. It will display through quotes from the Ricordi his expertise in understanding human nature; how he appears to base much of his approach on this; his understanding of the difference between theory and practice; and the importance of taking the unplanned into account. The chapter will begin to explain how history repeats itself, but in new disguises, using the example of British-Russian relations and of the tendency of former empires to continue colonialism in different ways.

Chapter 3. The War of the Theories
The chapter offers a trenchant critique of international relations theories which, while often useful as an aid to thinking about the world, tend to muddy the waters of clear understanding. While pointing to the confusion reigning in international relations theory—which reflects the current disorder in the world—and suggesting reasons for this, the chapter advocates a simpler, more reliable and less controversial method of understanding relations between states. Were it not for the very effort in trying to understand the theories considered, it would be difficult to explain geohistory, since it is the very fact that matters need clarification that leads us to geohistory as an approach.

Chapter 4. Geopolitics and the Politicisation of Geography
This chapter traces the origin of the term geopolitics as an imperial tool, how it went out of fashion and was then re-introduced. It considers how geography has been politicised and points out that geopolitics is a mainstay of political realism/power politics. The result is that it tends to sweep the human factor under the carpet, since it is concerned with the acquiring of resources, such as oil, which has included the drawing up of ‘business borders’ according to the interests of large powers, rather than natural borders. The Sykes-Picot agreement is used as an example.

Chapter 5. Casualties of Geopolitics
This chapter is a case study on how geopolitics has affected Cyprus and Iraq. Both can be identified as entities going back several thousand years, with the Mycenaean Greeks in the case of Cyprus and the Sumerians in Iraq. In their turbulent histories, both have been overrun by different powers, culminating with Turkish and British control in both respectively, before recently becoming theoretically sovereign states. It is interesting to juxtapose them, because they are entirely different entities, one an island and the other a large landmass. The same characteristics of the geopolitical mentality appear to have affected the countries adversely.

Chapter 6. Geohistory
This chapter ties together key points made in the previous chapters, setting out and explaining the essential elements of geohistory, first by arguing that history, in the purest form, is the past, which is occurring as we write. In antithesis to theories, with their models, paradigms and conceptual frameworks, geohistory is detached, depending rather on understanding human characteristics, both individual and corporate, which are the starting point of all relations between people and countries. As such, appearances and atavism are vital ingredients.

Read also:
‘We are witnessing a crime against humanity’: Arundhati Roy on India’s Covid catastrophe

Chapter 7. The Effects of Globalisation
This chapter will explore the connexions between geopolitics and globalisation. Both terms tend to be laden with linguistically bulimic phraseology, such as ‘global world’. The effects of globalisation on relations between states within the context of a geopolitical mindset will be considered, given its close connexion to international business. The so-called information explosion will be looked at, given the speed with which people have to move, which naturally detracts from thinking of the implications of their hurriedly, deadline-driven actions. The effect on the British Foreign Commonwealth and Development Office will be considered. Lessons will be drawn from geohistory.

Chapter 8. The Ricordi and Memory
This chapter will tie up all the converging strands of the book into a coherent and cogent whole, using various extracts from Guicciardini’s Ricordi, but also some of Christopher Hill’s ideas, arguing that they tend towards geohistory. Factors such as memory, atavism, nostalgia, nationalism and pride are identified as important in understanding state, as well as individual, behaviour, while reliance on the idea of national interests alone as the key determinant in inter-state relations is accepted too readily and uncritically, particularly given the woolliness of the concept of the nation-state. The significance of scrutinising documents to understand inter-state relations is emphasised