Friday, 21 January , 2022
Sign in
Welcome! Log into your account
Forgot your password? Get help
Password recovery
Recover your password
A password will be e-mailed to you.
Defend Democracy Press THE WEBSITE OF THE DELPHI INITIATIVE
We remind our readers that Greece, a member of the Eurozone and the EU and the birthplace of the notions of Democracy and Europe, has already been transformed into a protectorate and has also suffered the biggest economic and social disaster in capitalist Europe after 1945, as a result of the policies applied against the Greek people by the leadership of the reunited, “democratic” Germany, acting in alliance and close cooperation with International Finance and followed obediently by all European “elites” at the service of international Finance.
Greek public property is now looted by German and other international firms and the same is happening also with private property, through the taxation imposed by the troika.
About the role IMF and the international, mostly non European banks, governing Europe behind both the Commission, the ECB and also the “national” European governments and institutions, no honest and serious in the same time person can have any doubts. What seems very unfortunate and worrisome for all Europe, is the fact that Germany, the leading European power, does not seem capable of escaping its own past. It is very bad for Germans, it is very bad for the rest of Europe.
A majority of European citizens, helped by their politicians and their media, controlled as never before in history by bankers, prefer also to believe that this will affect only “lazy”, “disorganized”, “pro-Russian” and “corrupted” (by Siemens and EU!) Greeks and not their own fate. Such a belief is by itself the best indication a pan-European disaster is maybe in the making.
D.K.

Officials from the European Union (EU) and International Monetary Fund (IMF) agreed Friday to a take a unified hard line against Greece, as the country’s debt crisis worsens.

The Syriza government must make a further €7 billion payment to its creditors by July or risk default on its entire debt, which remains at a staggering €330 billion.

Greece continues to drown in debt because virtually every cent of the €300 billion in loans received over the last seven years as “bailouts” have been siphoned off to service its debt to banks and financial institutions that continue to draw interest.

For the last two years, the IMF has been involved in a fraught standoff with the EU, insisting that it would not back any further bailout programmes for Greece if they did not include some debt relief structures. The IMF is on record that Greece’s debt is unsustainable and opposes demands from the EU that Athens must meet a primary budget surplus of 3.5 percent. Instead, it calls for Greece to be bled dry more slowly—based on a 1.5 percent primary budget surplus with debt relief factored in so as not to kill the “milch cow”. Addressing an Atlantic Council event Wednesday, IMF Managing Director Christine Lagarde said, “Reforms are absolutely needed. Somebody can ask me the questions three times over, I will still say the same thing.”

The IMF position was reinforced by concerns that if Greece were forced out of the euro zone, it would mean a relaxing of the relentless imposition of massive budget cuts and threaten overall debt repayment by Athens. According to an IMF report leaked last week, Greece’s debt is set to reach 170 percent of gross domestic product by 2020 and 164 percent by 2022, and “become explosive thereafter”, escalating to 275 percent of GDP by 2060.

Friday’s announcement confirms that whatever tactical differences exist on the means to impose austerity on Greece, there are no conflicts over carrying it out. Reuters quoted a senior eurozone official: “There is agreement to present a united front to the Greeks.” Noting that the proposal had yet to be put to Greece, the official said, “What comes out of it, we will see.”

Regarding the substance of the “deal”, Reuters reported, “Officials said the lenders would ask Greece to take 1.8 billion euros worth of new measures until 2018 and another 1.8 billion after 2018, focused on broadening the tax base and on pension cutbacks.” The new cuts represent 2 percent of GDP, which has already fallen by 25 percent since 2010. In human terms, a further €3.6 billion in austerity represents taking another €327 from every man, woman and child in the country.

Read also:
Nazis' stolen 'loan' from Greek bank: Will Germany pay it back?

The party led by Alexis Tsipras is widely despised for repudiating its pledge to oppose austerity and agreeing to impose the most vicious attacks yet in return for a further €86 billion in loans. The latest poll shows Syriza has the support of just 15 percent of the electorate. Tsakalotos boasted last week that a third of the austerity measures Greece had to impose as part of the current programme have been “totally completed”, another third are “totally agreed”, while the rest are subject to “political negotiation.”

Under conditions in which US President Donald Trump has declared his desire for the break-up of the EU, Greece is once again in the eye of the storm. This week Ted Malloch, Trump’s favoured candidate for US ambassador to Europe, declared that Greece could soon be forced to exit the eurozone and the euro itself was under threat. Malloch told Greek broadcaster Skai TV, “Whether the eurozone survives, I think it’s very much a question that is on the agenda.”

He added, “We have had the exit of the UK, there are elections in other European countries, so I think it’s something that will be determined over the course of the next year, year-and-a-half.”

Trump himself has repeatedly insisted that Greece should withdraw from the euro. On announcing his candidacy for president last year, Trump described Greece’s position as “unsalvageable”. Back in October 2012 he tweeted, “Greece should get out of the euro & go back to their own currency—they are just wasting time.”

Of the divisions between the IMF and EU that seem at this point to have been patched up, Malloch said, “If the [IMF] will not participate in a new bailout that does not include substantial debt relief, and that’s what they are saying, then that, more or less, ensures a collision course with eurozone creditors.”

Germany led the resistance to the IMF proposals for debt relief, and challenged, along with other EU nations including France, Belgium and Sweden, the IMF’s Greek projections at a board meeting Monday.

The Financial Times editorialised, in a swipe primarily aimed at Germany, “The rest of the IMF’s membership should be prepared to overrule the recalcitrant Europeans. The complaints of a self-interested cabal cannot be allowed to get in the way of Greece’s best interests. Eurozone governments have behaved poorly on this issue. They deserve to be defeated.”

Germany responded not by backing down, but with brutal language and further threats against Greece. On Wednesday, German Finance Minister Wolfgang Schäuble warned that no relief would be offered on Greece’s mammoth debt—of which a substantial chunk is owed to German banks. “We can’t undertake a debt haircut for a member of the European single currency, it’s ruled out by the Lisbon Treaty,” he said, adding, “For that, Greece would have to exit the currency area.”

He continued, “The pressure on Greece to undertake reforms must be maintained … otherwise they can’t remain in the currency area.”

The joint EU/IMF proposals will be presented to the Syriza government, which is overseeing a social counterrevolution.

More than a third of the population (35.7 percent) are officially in poverty, unemployment stands at 23 percent and 46 percent among youth. Last year alone Syriza slashed another €350 million from the health budget under conditions in which 2.5 million Greeks have no health care coverage. Public spending on higher education was gutted by 75 percent five years ago, with 15 to 25 percent cuts in each subsequent year. An example of the impact of this is at the University of Crete, which had a budget of €17.5 million in 2011, but now operates with just €3.1 million.

Tsipras responded to Berlin’s warning by again solidarising his government with the EU. On Tuesday, he visited Kiev and held a joint press conference with Ukraine’s President Petro Poroshenko. Calling for continued sanctions against Russia, Tsipras said, “Greece is a member-state of the European Union and, despite the fact that it has a particular economic interest in an immediate resolution of the crisis and the lifting of sanctions that have had an extremely painful effect on the Greek economy, nevertheless we will not fragment European unity.” 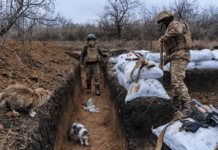 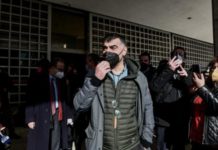