The continued political fallout from the poisoning of a Russian ex-spy in southern England has pushed the country’s media into a fervent discussion about what additional measures the West could take to collectively “punish” Russia. Sputnik has rounded up a few of the most “creative” ideas.

The success of the campaign by the UK and its allies to expel over a hundred Russian diplomats over yet to be proven claims of Moscow’s involvement in the poisoning of Sergei and Yulia Skripal has prompted some British media to indignantly ask which states had not closed ranks in solidarity with London.

Sky News, for example, wrote a whole piece on the issue with the headline “Salisbury nerve agent attack: Which countries are not expelling Russian diplomats?,” in which it complained that some nations, including “one of England’s oldest allies,” have not joined the expulsion drive. 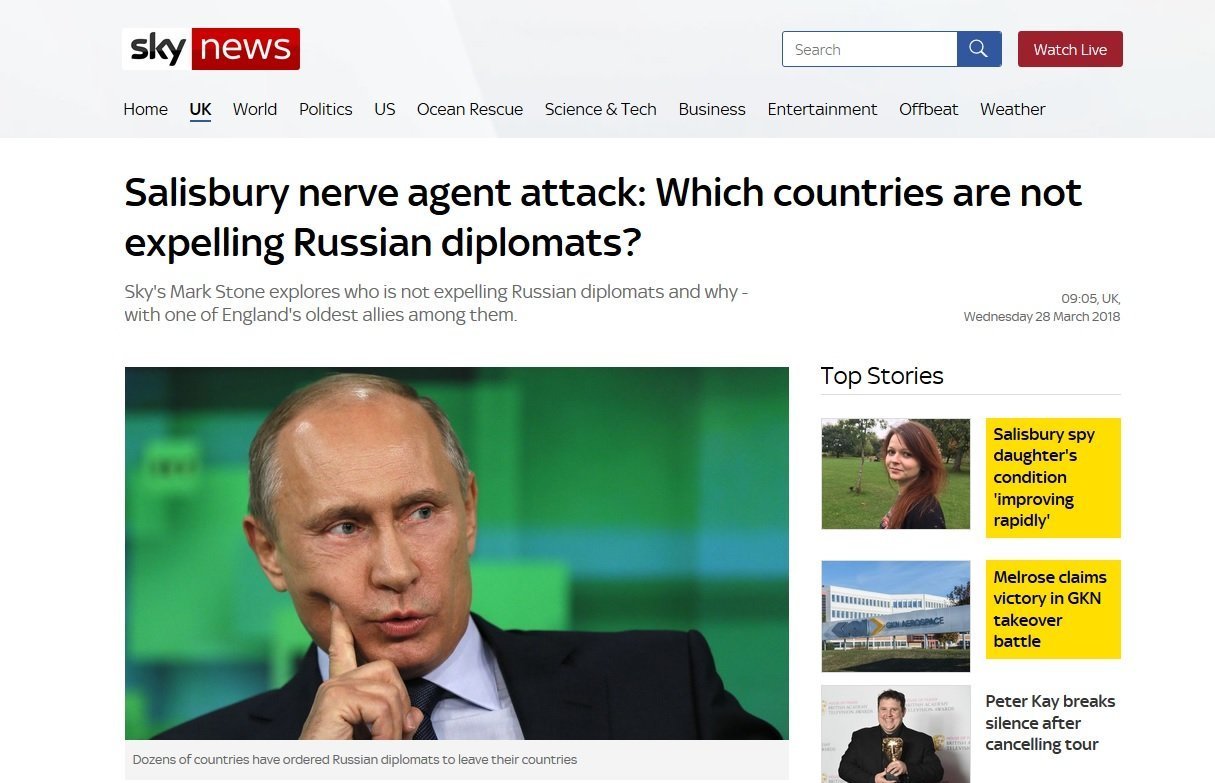 Correspondent Mark Stone boasted that “because so many countries have now backed the UK in expelling Russian officials, the few who have chosen not to have now become conspicuous with their decision.” Among these “conspicuous” countries was Portugal, whose friendship with the UK dates back nearly 900 years. Justifying Lisbon’s decision, Stone wrote that “it may be that the Portuguese could not find a security-related reason for any expulsions.” The same logic applies to Luxembourg and Malta, the reporter argued.

As for Greece, that country’s deep historical and religious ties to Russia, and the “openly pro-Kremlin” stance of some members of its government have “alarmed the EU and NATO for some time,” according to Stone. The journalist similarly complained about Slovakian “meandering,” Austrian “ties to the Kremlin,” Slovenian pride over good relations with Russia, and Bulgarian ties to Russian business as reasons for these countries’ decision not to kick Russian diplomatic officials out of their countries.

Read also:
The U.S. is determined to make Julian Assange pay for exposing the cruelty of its war on Iraq

For its part, the BBC emphasized that even those countries which showed no intention of expelling Russian diplomats “all have said they support the UK and condemn the poisoning,” slyly leaving out the fact that Greek, Slovakian and Slovenian officials have called for further evidence before placing the blame on Moscow.

Even New Zealand was not spared, catching flack for dragging its feet. At first, the country’s government insisted that they had failed to find any “undeclared Russian intelligence agents” working in Russia’s Embassy in Wellington. This explanation prompted criticism in the press about the government’s stance making the country a “laughing stock.” Finally, after several days of pressure, Prime Minister Ardern caved, banning alleged Russian spies kicked out of other countries from coming to New Zealand.

Commenting on the campaign of pressure, RIA Novosti contributor Vladimir Kornilov joked that “if things go on like this, London may start kicking out the diplomats of countries who refused to participate in the anti-Russian campaign.” 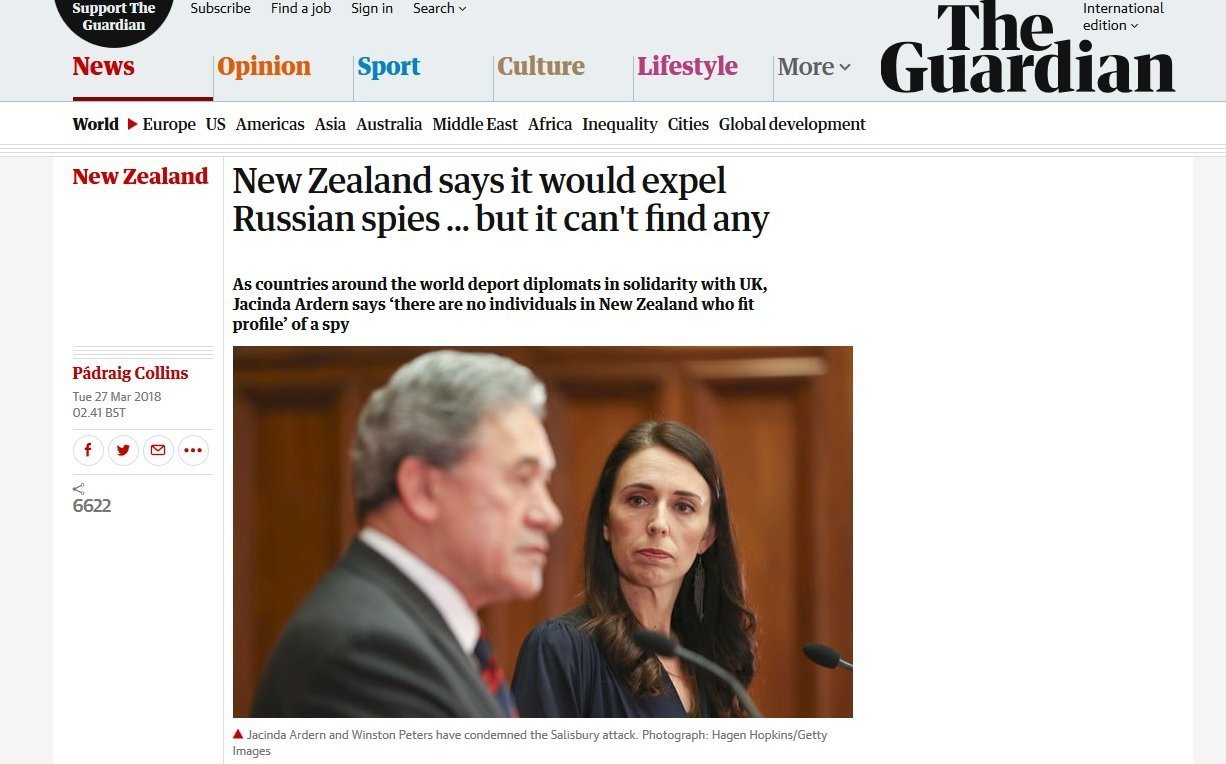 Kornilov pointed out the futility of the expulsion campaign, given that Russia now has every right to throw out diplomats from the countries that kicked out Russian ones. In this way, “‘Moscow’s suffering’ will be balanced by similar problems for Western countries,” he wrote.

Some media commentators seem to recognize the nature of the problem; hence the discussions about seizing the Britain-based assets of Russian oligarchs. The problem, according to Kornilov, is that “oligarchs” have been defined as any wealthy individual who speaks Russian or has ever been photographed with a Russian official.

For example, Prime Minister Theresa May’s Conservative Party faced criticism from Labour for taking over £820,000 pounds ($1.1 million US) in donations from Russian businessmen and their associates and refusing to pay it back. The fact that these businessmen include Alexander Temerko, a man wanted in Russia for fraud and obstruction of justice in the Yukos affair, has prompted media to write glowing commentaries about the wealthy fugitive, lest he too somehow end up among the list of Russians whose property can be subjected to seizure.

Read also:
The Ukraine: The USA is responsible for the escalation and must stop it before provoking a world war

“You ask what should be done to punish Vladimir Putin? My answer is – punish Putin personally, not people who have lived here for 15 or 20 years. It’s not right; if some oligarch who lives here is punished for Putin, he will say ‘yes, I was right, they are enemies. Now take your money, pull out your investments and come home to Russia.’ Who is the winner? Putin,” Chichvarkin complained.

Some media have gone further still. In an official comment last week, The Times wrote about the “foot dragging” by some EU states, arguing that their requirement for forensic verification of Russian culpability in the Skripal case only “play[s] into the hands of Vladimir Putin.”

Instead, The Times said, EU states must do more to not only freeze Russian state assets and subject Russian property purchases to closer scrutiny, but consider ideas like “the seizure of Aeroflot planes that have in the past carried assailants to Britain” to send a “united and powerful signal to a malign regime that has taken a step too far.”

For now, the UK’s actual “response” to a crime it hasn’t proven Russia committed has been somewhat limited, especially to media speculation ahead of Prime Minister May’s announcement on March 14 about what measures London would take. At that time, The Times, The Guardian, The Telegraph and others pointed out that London’s measures could include malicious cyberattacks against Russia, branding the country a sponsor of terrorism, a complete boycott of the World Cup and pulling RT’s broadcasting license in the UK.

Undoubtedly aware that Moscow would have the right to issue a symmetrical response, London has thus far refrained from moving forward with these more bellicose ideas. The question is whether continued media pressure will be able to push May into upping the ante.