After the Taliban takeover of Kabul, ordinary citizens are split over the expected influx of Afghan refugees into Iran

The Taliban’s return to power in Afghanistan after 20 years of conflict with US-led forces may have come as a shock for many across the world – but not for ordinary Iranians.

For as long as Mohammad – who requested to only be referred to by his first name – can remember, his Afghan relatives have been moving back and forth between the two countries.

The teacher, a resident of the town of Torbat-e Jam some 70 kilometres from a border crossing between Iran and Afghanistan, has distant family members who live in the Afghan city of Herat, 120 kilometres on the other side of the border.

“As a child, I remember my fathers’ cousins coming from Afghanistan to our home – but when the (Soviet-Afghan) war started, things changed,” he told Middle East Eye over the phone.

Ever since the Soviet Union invaded Afghanistan 42 years ago, Iranians have been living alongside Afghan refugees and immigrants – and many in the country see the fall of Kabul as yet another dark chapter in the neighbouring country’s contemporary history.

But the recent crisis in Afghanistan has brought a renewed debate in Iran: should the country keep its doors closed to refugees, amid its fifth wave of the Covid-19 pandemic and an economy strained by years of US sanctions, or should solidarity prevail?

A long history between neighbours

The first wave of Afghan refugees entered Iran in 1979, just as pro-Soviet forces fought against Afghan Mujahideen, rebels from various ethnic groups who received support from western countries. The conflict in Afghanistan erupted during the popular uprising against Iran’s Shah.

After the monarchy collapsed in Iran, replaced by an Islamic republic, Grand Ayatollah Ruhollah Khomeini ordered the opening of the borders to Afghan refugees.

While many Afghans initially landed in Iran’s eastern provinces near the border, many went on to settle across the country.

“Thousands of Afghan people crossed the border and came to Torbat-e Jam, but after a while, they had to go to larger cities like Tehran, Mashhad or Isfahan to find a job and a place to escape the war,” Mohammad recalled.

But in 2021, Tehran has a different policy vis-a-vis Afghan refugees, despite calls by the UN refugee agency (UNHCR) urging Afghanistan’s neighbours to keep their borders open.

On 6 August, several hundred Afghans fleeing the Taliban reached the Milak crossing, only to be kept at the border by Iranian authorities for two days before being sent back to Afghanistan.

Iranian officials have spoken to Farsi news outlets to reject “any rumours about setting up camps” for new Afghan refugees.

However, a source in Iran’s Red Crescent Organisation told MEE that, despite government denials, small-sized tent camps had already been set up near the Iran-Pakistan border to accommodate Afghan refugees. Over the years, many Afghans who could not cross the border with Iran travelled south to Pakistan and then entered Iran through the southwestern province of Sistan and Baluchestan.

So far, Iranians like Mohammad living close to the Afghan border have yet to see any significant changes as a result of the new escalation next door.

“I have not seen new refugees coming from Afghanistan yet because no one can cross the border,” Mohammad said. “I guess even human traffickers have stopped their activities for now, because the Iranian side controls the border very strictly. On the Afghan side, no one knows who is in charge and what orders Taliban fighters have received about human trafficking.”

Read also:
Trump threatens Iran with ‘OBLITERATION’ by ‘overwhelming force’ if it attacks ‘anything American’

Meanwhile, many ordinary Iranians have taken to social media to urge Tehran to let refugees in.

An image shared by Twitter users depicted a map of Iran and Afghanistan, with a caption reading: “Let’s cry in each other’s arms.”

“Iran’s interior ministry’s orders… is inhumane and against human rights law,” he wrote on Twitter.

‘The calm before the storm’

However, not all Iranians share the same sentiment about a potential influx of new Afghan refugees, especially those who live in regions already home to many of the country’s three million Afghan residents.

According to UNHCR, over two million undocumented Afghans lived in Iran in 2020, in addition to 780,000 Afghan refugees with temporary residence permits and another 600,000 Afghan passport holders.

Before the current closure of the Afghanistan-Iran border, four Iranian provinces were the major destinations for Afghans in Iran: Tehran, Khorasan Razavi, Isfahan and Kerman.

Residents of Mashhad, the provincial capital of Khorasan Razavi, told MEE they had not witnessed an influx of refugees into the city in recent weeks, but expressed worries about the consequences of the fall of Afghanistan into the hands of the Taliban.

“The current situation is like the calm before the storm,” an academic at Mashhad University, who requested anonymity, told MEE.

According to this academic, officials in Tehran won’t have any other choice but to change their closed-border policy should the humanitarian crisis worsen in Afghanistan.

“I’m not saying the border should be closed or opened – as we have seen all over the world, a borderline cannot stop the influx of refugees when a crisis begins,” they explained.

Nonetheless, the Mashhad professor was unimpressed by members of Iran’s opposition urging the government to open the borders, calling them “armchair critics”.

Read also:
Iran Admits Fire in Natanz Is a Setback to Centrifuge Program

“If the government had kept the borders open, these same people from the opposition would have attacked the government for offering resources to Afghan refugees while Iranians are dying of the pandemic and a severe economic crisis,” the academic noted.

“If they are in favour of humanitarian aid, why do the oppositions criticise the government when they offer aid to people in Palestine or Lebanon? To me, this kind of rhetoric sounds more political than in favour of refugees.”

A physician who works in a public health centre in the Sistan and Baluchestan province told MEE that his only Afghan patients have so far been living in Iran for years.

However, he said that Iran’s health ministry had recently published internal reports urging physicians to be aware that diseases such as El Tor, a strain of cholera, and tuberculosis might reappear in provinces bordering Afghanistan and Pakistan.

“Undocumented immigrants are forced to live in terrible conditions for days, deprived access to basic sanitation,” the doctor said. “I think that is why health officials have warned us about a possible outbreak of these diseases.

“This warning tells me that officials know a new wave of Afghan refugees is on the way,” he added. “It is just a matter of time, but everyone knows that sooner or later, Afghans will have to leave their homes again.” 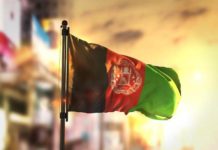