In response to Russia’s 2022 invasion of Ukraine, the U.S. and EU have imposed heavy sanctions aimed at crippling the Russian economy. However, as Visual Capitalist’s Marcus Lu details below, these bold actions also come with some potentially messy complications: Russia is not only one of the world’s largest exporters of energy products, but it is also Europe’s biggest supplier of these fuels.

As of October 2021, Russia supplied 25% of all oil imported by the EU, which is three times more than the second-largest trade partner. Naturally, the policies and circumstances that have led to this dependency have been under major scrutiny in recent weeks.

To help you learn more, this infographic visualizes energy data from Eurostat. 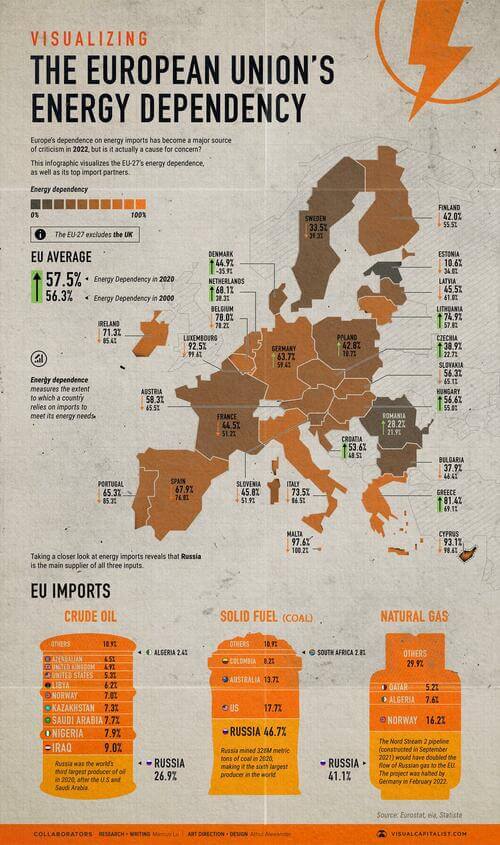 To start, let’s compare the energy dependence of each EU member, both in 2000 and 2020 (the latest year available). This metric shows the extent to which a country relies upon imports to meet its energy needs.

Note that Denmark’s value of -35.9% for the year 2000 is not a typo. Rather, it means that the country was a net exporter of energy.

Over this 20-year timeframe, the EU-27 average country’s energy dependence has increased from 56.3% to 57.5%, meaning EU members became slightly more reliant on energy imports over those two decades.

Where Do EU’s Energy Imports Come From?

Looking further into energy imports reveals that Russia is the main supplier of crude oil, coal, and natural gas. Continue below for more details.

The EU imports more crude oil from Russia than the next three countries combined.

This shouldn’t come as a surprise, as Russia was the world’s third largest producer of oil in 2020. The country has several state-owned oil companies including Rosneft and Gazprom.

Coal-fired power plants are still being used across the EU, though most member states expect to completely phase them out by 2030.

Russia has the second largest coal reserves in the world. In 2020, it mined 328 million metric tons, making it the sixth largest producer globally.

Natural gas is commonly used to heat buildings and water. A majority of the EU’s supply comes from Russia via the Nord Stream series of pipelines.

Nord Stream 1 is the longest sub-sea pipeline in the world and was completed in 2011. It starts from the Russian city of Vyborg and connects to the EU through Germany.

Nord Stream 2 is a recently constructed expansion which was expected to double the project’s capacity. Germany has since halted the approval process for this pipeline in response to Russia’s 2022 invasion of Ukraine.

In retaliation against Western sanctions, Russia has announced an impending ban on exports of certain goods and raw materials.

European gas prices skyrocketed in response, as many fear that Russia could cut off natural gas supplies. This, of course, would have very negative effects on both consumers and businesses.

In early March 2022, both the European Commission and the International Energy Agency (IEA) introduced proposals on how Europe could reduce its energy dependency.

We must become independent from Russian oil, coal and gas. We simply cannot rely on a supplier who explicitly threatens us.
– URSULA VON DER LEYEN, PRESIDENT OF THE EUROPEAN COMMISSION

Cutting off one’s biggest supplier is likely to cause issues, especially when dealing with something as critical as energy. Few countries have the capacity (or willingness) to immediately replace Russian imports.

How America Took Out The Nord Stream Pipeline

Aid to earthquake victims requires the immediate lifting of US sanctions...