Thousands of impoverished Greeks flocked to the premises of Thessaloniki Fair to receive a bag of food donated by the European Union. Vegetables, olive oil, chicken, cheese but also basic items like washing powder and dish detergents.

Since 8 o’ clock in the morning, men and women, young and old, formed long queues waiting for the food distribution to start. They were holding their ID in one hand and a stamped paper confirming they were beneficiaries. A total of 9,196 people.

However, the distribution did not take place in a calm atmosphere, the beneficiaries broke again and again through the barriers set by police.

At the end of the day, the beneficiaries went home with some food for a couple of days, food and detergents generously donated by the EU as part of the implementation of the Operational Program “Food and Basic material Assistance for the European Support Fund for the Needy (TEBA / FEAD)».

The correct title is “The Fund for European Aid to the Most Deprived (FEAD)“. The Fund was proposed by the EU Commission in 2012 and was approved by the European Parliament in 2014 and later by the EU’s Council of Ministers.

The main purpose of the Fund for European Aid to the Most Deprived (FEAD), worth €3.8 billion in the 2014 to 2020 period, is to support Member States’ social emergency relief schemes. The FEAD will support Member States’ actions to provide a broad range of non-financial material assistance including food, clothing and other essential goods for personal use such as shoes, soap and shampoo, to materially-deprived people, including the homeless, and their children.

“The Fund will help the most-deprived, the homeless and materially-deprived children to break out of the vicious circle of poverty and deprivation and so make a concrete contribution to the Europe 2020 target of reducing the number of people in poverty or at risk of poverty by at least 20 million.” via EC statement

A noble cause. It’s only that one should brief the EU that “donated food, clothes and soap” does not eliminate poverty, it just helps the poor come through their poverty conditions.

A truly noble cause is to eliminate the conditions that create poverty. With Jobs, for example. And descent wages.

Can the EU do this? 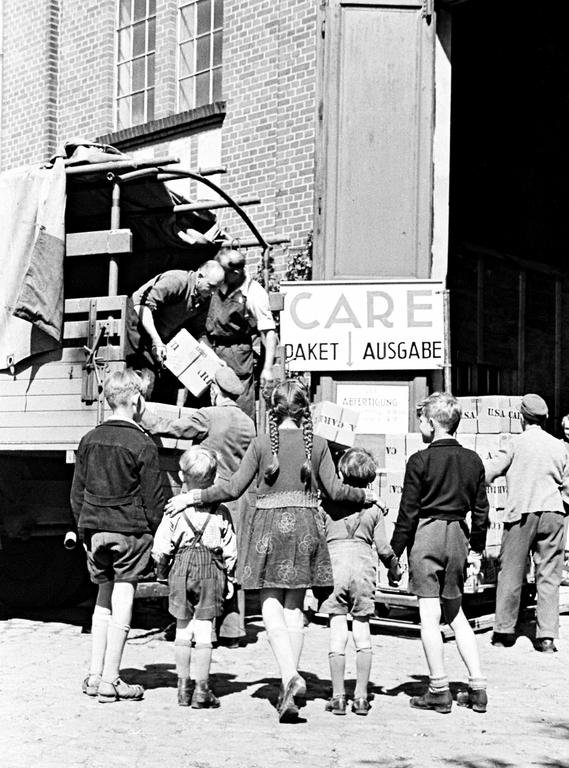 ops! I’m afraid this is a wrong picture. It shows American CARE packages for inhabitants of the occupied zones in Germany, 1st June 1946 (via @GermaniAtPompey)

PS The EU must be really proud about this! I mean “the assistance”….

Didn’t we criticize yesterday the EU for creating homeless and then it fund a survey to read the impact of its policies? Yes, we did.