The person(s) who first published documents of the shady UK organization Integrity Initiative decided that the discussion is about the Initiative is not yet sufficient and published more documents.

The first dump on the Cyberguerilla site happened on November 5. We discussed it here. A smaller dump on November 29 revealed more about the UK government paid Integrity Initiatives influence work in Germany, Spain and Greece. A third dump followed today.

The leaker, who uses the widely abused Anonymous label, promises to publish more:

Well-coordinated efforts of the Anonymous from all over the world have forced the UK politicians to react to the unacceptable and in fact illegal activity of the British government that uses public money to carry out misinformation campaigns not only in the EU, US and Canada but in the UK as well, in particular campaigns against the Labour party.

The Integrity Initiative is now under first official investigation. We promise to give close scrutiny to the investigation that we believe should be conducted honestly, openly and absolutely transparently for the society, rather than become an internal and confidential case of the Foreign Office.

To show our expertise in the investigation as well as to warn the UK government that they must not even try to put it all down to the activity of some charity foundations and public organizations we reveal a part of documents unveiling the true face of The Institute for Statecraft and some information about its leadership.
…
As the scandal in the UK is gaining momentum, it is ever so striking that European leaders and official representatives remain so calm about the Integrity Initiative’s activity in their countries. We remind you that covert clusters made up for political and financial manipulation and controlled by the UK secret services are carrying out London’s secret missions and interfering in domestic affairs of sovereign states right in front of you.
…
This is another part of documents that we have on the Integrity Initiative. We do not change the goals of this operation. When we return with the next portion of revelations, names and facts depends on how seriously the UK and EU leaders take our intentions this time.

The dump includes invoices, internal analyses of international media responses to the Skripal affair, the Initiative’s operations in Scotland, France and Italy, some strategy papers and various other stuff. There are some interesting bits about the cooperation of the Initiative with British Ministry of Defense. It will take me a while to read through all of it.

The most interesting paper I found so far is:

A “strictly confidential” proposal by the French company Lexfo to spread the Integrity Initiative’s state-sponsored propaganda through an offensive online influence campaigns for a monthly pay per language of €20-40.000. The proposal also includes an offer for “counter activism” through “negative PR, legal actions, ethical hack back, etc.” for €50,000 per month. 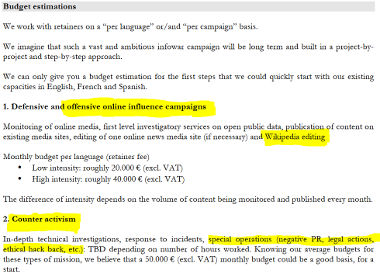 The offer claims that the company can launch hundreds of “news” pieces per day on as many websites. It notably also offers to “edit” Wikipedia articles.

It is at the core what the Integrity Initiative, which obviously requested the proposal, is about.

But as we saw in the information revealed yesterday there is more to it. The Initiative, which has lots of ‘former’ military and intelligence people among its staff, is targeting the political left in Britain as well as in other countries. It is there where it becomes a danger to the democratic societies of Europe.