Zero Days: US may have spent “billions” on cyber warfare to placate Israel

The American public and think tank analysts are not supposed to know precisely how billions in taxpayer dollars flowing into the intelligence community are spent. Even the best plead ignorance. Steven Aftergood of the Federation of American Scientists Project on Government Secrecy commenting on huge budget increases told the Washington Examiner, “What exactly that signifies, it’s hard to say. Are there new program leads? Are there new acquisitions? It could be new operations or collection programs. We don’t know and we’re not supposed to know.”

Israel is one undeniably large factor behind spending surges since 2005. Israel successfully demanded enormous increases in joint U.S.-Israeli cyber warfare expenditures and benefited from related U.S. contingency planning. Due to onerous secrecy, Americans remain unable to engage in informed public debate about whether what amounts to US subjugation to the Israeli prerogatives driving these massive expenditures should continue. 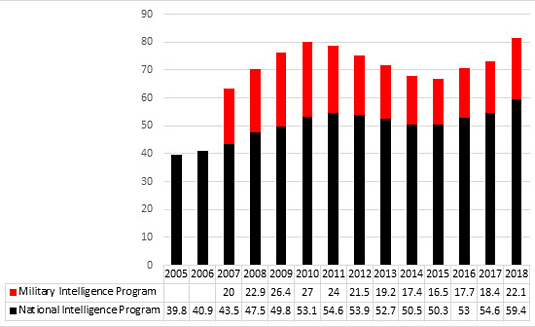 Former NSA Director (1999-2005) and CIA Director (2006-2009) Michael Hayden claimed in Zero Days that the goal of any Israeli air attack against Iran’s nuclear facilities would be to drag the United States into war.

“Our belief was that if they [Israel] went on their own, knowing the limitations…No, they’re a very good air force, alright? But it’s small and the distances are great, and the targets dispersed and hardened, alright? If they would have attempted a raid on a military plane, we would have been assuming that they were assuming we would finish that which they started. In other words, there would be many of us in government thinking that the purpose of the raid wasn’t to destroy the Iranian nuclear system, but the purpose of the raid was to put us [the United States] at war with Iran.”

Iran was and continues to be a signatory to the Treaty on the Non-Proliferation of Nuclear Weapons and remains under comprehensive IAEA monitoring and inspections. But to appease Israel and to demonstrate to its US lobby that the administration was working diligently to preempt the development of Iranian nuclear weapons, President Obama ordered the US intelligence community to work with Israel’s Mossad and Unit 8200 to take out Iranian nuclear facilities.

The “Olympic Games” cyber warfare weapons developed and launched against Iran temporarily set back Natanz centrifuge cascades. But according to Zero Days, Israel’s suspected overzealous derivative uses of the computer worm created for the task (identified as “Stuxnet” by the civilian antivirus industry) spread it throughout global computer networks. That gave countries such as Russia, North Korea, China and Iran the capability to replicate and turn their own versions of the cyber weapons against western targets.

NSA whistleblowers quoted in Zero Days verified that in contingency planning for the possibility Israel might attack Iran anyway, dragging the US into war as feared, the US also spent vast additional sums on cyber warfare tools designed specifically to cause massive damage to Iran’s civilian and military systems.

“We spent hundreds of millions, maybe billions on it. In the event the Israelis did attack Iran, we assumed we would be drawn into the conflict. We built in attacks on Iran’s command-and-control system so the Iranians couldn’t talk to each other in a fight. We infiltrated their IADs [Intelligent Assist Devices], military air defense systems, so they couldn’t shoot down our planes if we flew over. We also went after their civilian support systems, power grids, transportation, communications, financial systems. We were inside waiting, watching, ready to disrupt, degrade, and destroy those systems with cyber-attacks. And in comparison, Stuxnet was a back- alley operation.”

The name of the broader cyber warfare program targeting Iran was “Nitro Zeus” – presumably named after the “loudmouthed, trash-talking, strutting, self-aggrandizing jerk” from the Transformers toy and entertainment franchise.

In an attempt to broaden support for his administration’s Iran nuclear deal – the JCPOA – President Obama officially acknowledged the massive new outlays of intelligence support to Israel in a 2015 speech at American University. “But the fact is, partly due to American military and intelligence assistance, which my administration has provided at unprecedented levels, Israel can defend itself against any conventional danger – whether from Iran directly or from its proxies.”

With Israel already receiving the lion’s share of the publicly acknowledged US foreign aid budget (over $250 billion since 1948) Americans should also know what additional percentage of total black budget aid is funneled directly to and spent on behalf of Israel. The majority of Americans oppose foreign aid to Israel and believe such funding could be much better spent in the US. Though considered a quaint anachronism in official Washington, the Arms Export Control Act forbids unconditional US foreign aid of all kinds to countries that – like Israel – have never signed the NPT but which nevertheless have active nuclear weapons programs.

Mass media pundits interviewed in Zero Days – such as David Sanger of The New York Times – claim the overriding question is about cyber weapons and the lack of recognized doctrines such as those established in the realm of nuclear weapons, like “mutually assured destruction.” No mainstream media outlets question Israel’s right to drag the US into war, and Israel still appears to be capable of dragging the US into a war with Iran whenever and however it chooses.

Public debate about Israel’s role in nearly one trillion dollars of US intelligence spending since 2005 is even more pressing now that President Trump has withdrawn the US from the JCPOA and restored heavy economic sanctions. Absence of relevant data is why there is so little informed public debate about whether the United States should continue to be so beholden to Israel that federal officials automatically spend vast sums on secret contingency planning presuming the US will defend Israel at any cost. But courts could improve transparency.

A year 2015 Freedom of Information Act lawsuit filed in DC district court has argued – successfully so far – that Obama’s official acknowledgment of “unprecedented” flows of intelligence support prevents one key “Olympic Games” and “Nitro Zeus” partner – the CIA – from claiming it cannot “confirm or deny” the actual budget line items being spent on Israel. Although in September the court declined to allow the plaintiff to expand the sunshine lawsuit by adding the National Security Agency, Director of National Intelligence and the Defense Intelligence Agency as defendants, the important revelations contained in Zero Days may ultimately help force at least one key intelligence community member to finally divulge the precise amount Israel and its vast US lobby have been able to squeeze out of America’s black budget.

This is despite the tremendous deference intelligence agencies have long cultivated in federal courts to bolster arguments that unofficial leaks about classified programs should never be allowed to sway judicial opinions. As quoted by the judge who will soon decide the outcome of the CIA black budget lawsuit – defenders of blanket secrecy cannot overcome one important and long-standing precedent. Judges should never be ignorant of what they know as women and men.

* Grant F. Smith is research director of the Institute for Research: Middle Eastern Policy and the plaintiff in civil action no. 15-CV-01431 seeking CIA intelligence budget line items supporting Israel from 1990 through 2015. He is the author of the 2016 book, Big Israel: How Israel’s Lobby Moves America now available as an audiobook.

Turning Hagia Sophia into a mosque: A new crisis in Eastern...

EU Recovery Plan: a rocky road ahead | By Klaus Dräger

Tönnies or the failure of “social Europe”

‘Herd Immunity’ Is a Failed Response to Coronavirus

What Will Happen Now to Hagia Sophia’s Byzantine Mosaics?