There is real power in the word “No.”

In fact, I’d argue that it is the single most powerful word in any language.

In the midst of the worst market meltdown in a dozen years which has at its source problems within global dollar-funding markets, Russia found itself in the position to exercise the Power of No.

Multiple overlapping crises are happening worldwide right now and they all interlock into a fabric of chaos.

Between political instability in Europe, presidential primary shenanigans in the U.S., coronavirus creating mass hysteria and Turkey’s military adventurism in Syria, the eastern Mediterranean and Libya, markets are finally calling the bluff of central bankers who have been propping up asset prices for years.

But, at its core, the current crisis stems from the simple truth that those prices around the world are vastly overvalued.

Western government and central bank policies have used the power of the dollar to push the world to this state.

And that state is, at best, meta-stable.

But when this number of shits get this freaking real, well… meeting the fan was inevitable.

And all it took to push a correction into a full-scale panic was the Russians saying, “No.”

The reality has been evident in the commodity markets for months.  Copper and other industrial metals have all been in slumps while equity markets zoomed higher.

But it was oil that was the most confounding of all.

Most of 2019 we saw oil prices behaving oddly as events occurred with regularity to push prices higher but ultimately see them fall.

Since peaking after the killing of Iranian General Qassem Soleimani oil prices have been a one-way trade. Down. 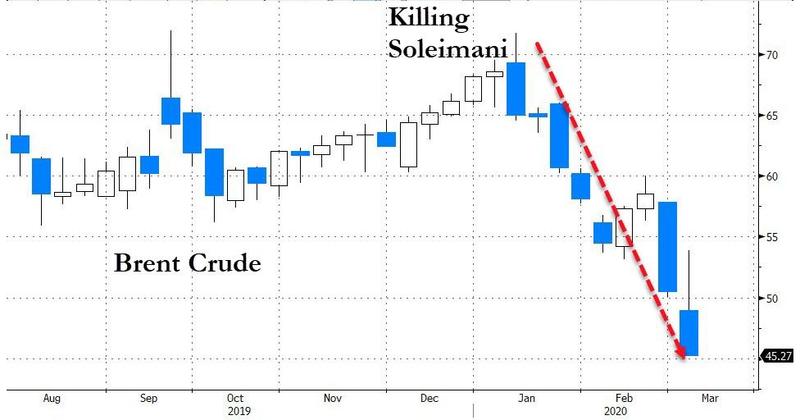 Our inept leaders are trying to blame coronavirus as the proximate cause for all of the market’s jitters.

But that masks the truth. The problems have been there for months, pushed to the back burner by incessant Fed intervention in the dollar-funding markets.

The 2008 financial crisis was never dealt with, just papered over.

And it reappeared with ferocity this week as people sold dollars and bought U.S. treasuries pushing U.S. yields on the long end of the curve to absurd levels.

The Fed intervenes to keep short term interest rates from rising to preserve the fiction it is still in control.

The market wants higher rates for short-term access to dollars.

The Fed tried to help by cutting rates by 0.5% but all that did was tell people the Fed was as scared as they were.  The selling resumed and gold bounced back to it’s recent high near $1690, only to be swatted down on the New York open this morning.

Read also:
After day of fighting, the fog of almost-war creeps in

That didn’t work either. 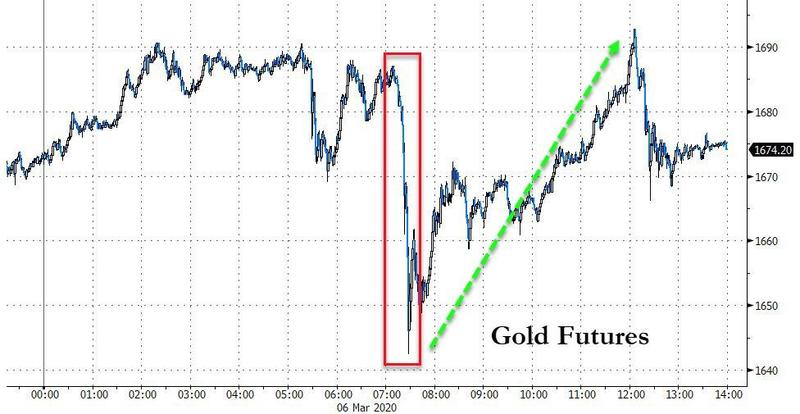 And into this mess OPEC tried to save itself by asking for a historic production cut.

OPEC needs this cut to remain relevant. The cartel is dying. It’s been dying for years, kept on life support by Russia’s willingness to trade favors to achieve other geostrategic goals.

I’ve said before that OPEC production cuts are not bullish for oil just like rate cuts are not inflationary during crisis periods.

But finally Russia said No. And they didn’t equivocate. They told everyone they are prepared for lower oil prices.

The panic was palpable in the reporting on the meeting.

“Regarding cuts in production, given today’s decision, from April 1, no one — neither OPEC countries nor OPEC+ countries — are obliged to lower production,” he told reporters after the meeting.

OPEC’s Secretary General Mohammed Barkindo said the meeting had been adjourned, although consultations would continue.

“At the end of the day, it was the general, painful decision of the joint conference to adjourn the meeting,” he told reporters.

Earlier, Oanda analyst Edward Moya had suggested that a failure to reach an agreement could spell the end of OPEC+.

“No-deal OPEC+ means the three-year experiment is over. OPEC+ is dead. The Saudis are all-in on stabling oil prices and they may need to do something extraordinary,” he said.

There comes a point where negotiating with your adversaries ends, where someone finally says, “Enough.” Russia has been attacked mercilessly by the West for the crime of being Russia.

And I’ve documented nearly every twist and turn of how they have skillfully buttressed their position waiting for the right moment to get maximum return to reverse the tables on their tormentors.

And, to me, this was that perfect moment for them to finally say “No,” to get maximum effect.

When dealing with a more-powerful enemy you have to target where they are most vulnerable to inflict the most damage.

For the West that place is in the financial markets.

Remember, the first basic fact of economics.  Prices are set at the margin. The only price that matters is the last one recorded.

That price sets the cost for the next unit of that good, in this case a barrel of oil, up for sale.

In a world of cartelized markets the world over, where prices are set by external actors, it is easy to forget that in the real economy (regardless of your political persuasion) the world is an auction and everything is up for bid.

So, the most important geostrategic question is, “Who produces the marginal barrel of oil?”

For more than three years now, President Trump has supported his policy of Energy Dominance in a Quixotic quest for the U.S. to become that supplier.  Trillions of dollars have been spent on building up domestic production to their current, unsustainable levels.

This policy pre-dates Trump, certainly, but he has been its most ardent pursuer of it, sanctioning and embargoing everyone he can to keep them off the bid.

What he could never do, however, was push Russia off that bid.

The reason U.S. production rates are unsustainable is because their costs are higher per barrel than the marginal price especially when all other prices are deflating.  Simple, straightforward economics.

If they were, on balance, profitable then the industry as a whole would not have burned through a few hundred billion in free cash flow over the past decade.

That’s where the Russians’ power comes from.  Russia is one of the lowest cost producers in the world.  Even after paying their taxes to the government their costs are far lower, close to $20 per barrel break-even point, than anyone else in the world when one factors in external costs.

When you don’t owe anyone anything you are free to tell them, “No.”

Sure, the Saudis produce at similar cash costs to the Russians but once you factor in its budgetary needs, the numbers aren’t even close as they need something closer to $85 per barrel.

They can’t tell their people, “No,” you have to do without. Because the populous will revolt.

Russia can ride out, if not thrive, in this low price regime because :

All of this adds up to Russia holding the whip hand over the global market for oil.

And they will have it for years to come as U.S. production implodes.  Because they can and do produce the marginal barrel of oil.

That is why oil prices plunged as much as 10% into today’s close on the news they would not cut production.

There is a cascade lurking beneath this market. There is a lot of bank and pension fund exposure in the U.S. to what is now soon-to-be non-performing fracking debt.

Read also:
Now they begin to realise the consequences of what they are doing

Liquidations will begin in earnest later this year.

But the market is handicapping this now.

I cannot overstate how important and far-reaching this move by Russia is.  If they don’t make a deal here they can break OPEC. If they do make a deal it will come with strings that ensure pressure is lifted in other areas of stress for them.

The knock-on effects of oil plunging from $70 per barrel to $45 over two months will be felt for months, if not years.

And it is no shock to me that Russia held their water here. If they didn’t, I would have been surprised.

This was Putin’s opportunity to finally strike back at Russia’s tormentors and inflict real pain for their unscrupulous behavior in places like Iran, Iraq, Syria, Ukraine, Yemen, Venezuela and Afghanistan.

He is now in a position to extract maximum concessions from the U.S. and the OPEC nations who are supporting U.S. belligerence against Russia’s allies in China, Iran and Syria.

We saw the beginnings of this in his dealings with Turkish President Erdogan in Moscow, extracting a ceasefire agreement that was nothing short of a Turkish surrender.

Erdogan asked to be saved from his own stupidity and Russia said, “No.”

This condition of producing the marginal barrel of oil in a deflationary world places Russia in the driver’s seat to drive U.S. foreign policy behavior in an election year.

Talk about meddling in our elections!

The Achilles’ heel of the U.S. empire is the debt.  The dollar has been its greatest weapon and it is still king.  And it is a weapon with a great deal of power but wielded only against the U.S.’s allies, not Russia.

Markets will adjust and calm down in a few days. The panic will subside. But it will come back soon enough in a more virulent form. Today is a replay of 2007-08 but this time Russia is far better prepared to fight back.

And when that happens, I suspect it won’t be the Saudis or the Turks that come running to Russia to save them, but the U.S. and Europe.

At which point, I have to wonder if Putin will channel his inner Rorschach.