The six largest oil and gas companies reported in excess of $55 billion in combined profits in 2019. Just these six companies have generated $2.4 trillion in profits since 1990 (see table below). The oil and gas industry is undoubtedly one of the most profitable in the world.

Despite their enormous profitability, oil and gas companies still receive generous subsidies from the U.S. federal government. They have also avoided the massive costs of climate change caused by oil and gas consumption. These costs, which include damages from intensified storms, floods, and drought easily run into the trillions of dollars, and are now largely paid for by federal taxpayers. The oil and gas industry has known for decades about the linkage between fossil fuel consumption and climate change, but they chose to publicly deny it while the federal government – taxpayers – have paid the price. 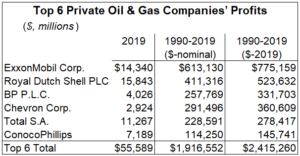 As the government’s fiscal health continues to deteriorate, and climate change costs rise, taxpayers cannot afford to shell out billions of dollars in subsidies and carry mounting climate liabilities for the hugely profitable oil and gas industry.

Provisions of the U.S. tax code that allow oil and gas companies to write off exploration and development expenses, form master limited partnerships, and take advantage of Last-In, First-Out accounting (among others) reduce revenue to the Treasury by billions of dollars every year. Combined with charitable regulations for development on federal lands that allow for free use of natural gas, methane venting and flaring with little oversight, and royalty payments at a fraction of rates charged by state and private lands, these policies have padded industry’s profits by more than $100 billion over the last few decades, all at taxpayers’ expense.

Read also:
When the Rain Came to Houston

‘Zombie’ viruses have been revived from Siberian permafrost. Could they infect...

Destination Africa: The scramble to sell cyberweapons to dictators