“I have collected evidence of how they [Newsweek] suppressed the story in addition to evidence from another case where info inconvenient to US government was removed, though it was factually correct.”

A top journalist has resigned from his post after management killed his report on the bombshell news that the Organization for the Prohibition of Chemical Weapons (OPCW) suppressed a mountain of evidence suggesting that the 2018 Douma Chemical Weapons Attack in Syria was staged.

Newsweek’s Tareq Haddad announced on Twitter that, rather than accepting top-down censorship on an important issue, he was publicly walking away from his job at the New York-based magazine. 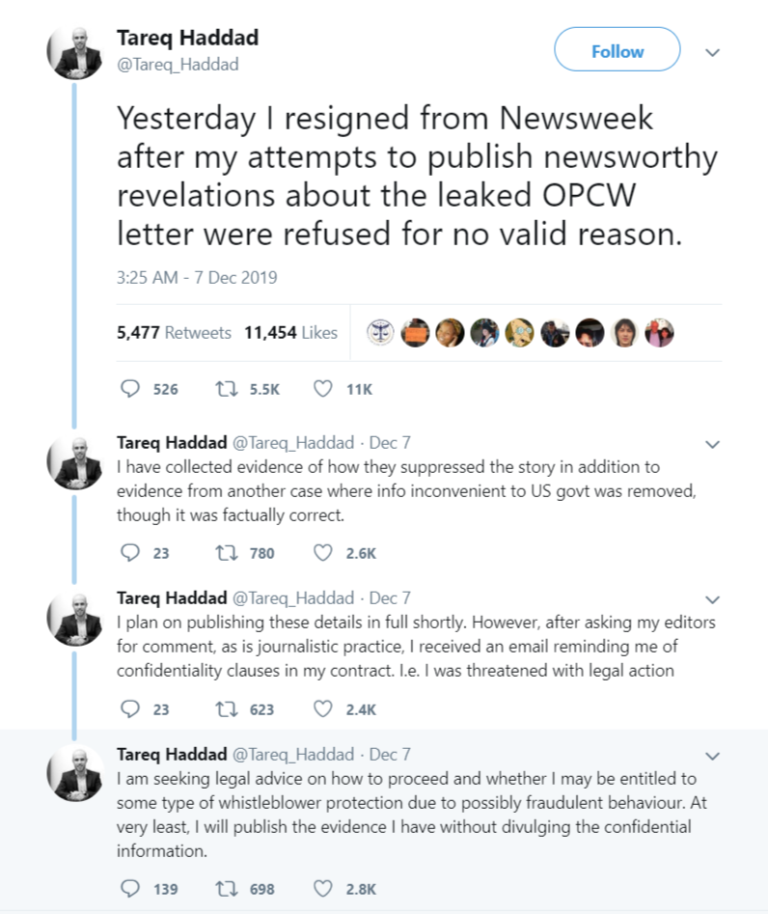 “I have collected evidence of how they suppressed the story in addition to evidence from another case where info inconvenient to US government was removed, though it was factually correct,” Haddad said, adding that he will publish full details about the event shortly but that “I was threatened with legal action” from his employers, who had inserted a confidentiality clause into his contract for just such an occasion as this.

He also stated that he is seeking legal advice from specialists in whistleblowing and that, “At the very least, I will publish evidence I have without divulging the confidential information.”

The shocking news that the OPCW fixed its own report in order to frame the Syrian government for a chemical weapons attack that likely did not even happen, according to its own expert investigators, has been roundly ignored by corporate media, but not by MintPress News, who has covered the news in depth.

Members of the OPCW team have come forward, expressing their “gravest concern” about the “selective representation of the facts” and the “intentional bias” “undermining the credibility of the report.” Even former OPCW Director-General Dr. Jose Bustani stated that the whistleblowers’ testimonies have “confirmed the doubts and suspicions” he already had about the organization and Syria.

The alleged chemical weapons attack was immediately used as a justification for foreign intervention in the conflict. Within days, the U.S., France and the United Kingdom launched bombings campaigns on the country, risking a potential nuclear conflict with Russia to the great approval of corporate media. Not one of the top 100 American newspapers by circulation opposed the extremely hasty actions.

Haddad is a rare reporter in today’s corporate media landscape; one who insists on covering important issues such as the OPCW report, police killings of citizens, and the treatment of Julian Assange. He was also literally the only journalist across the entire mainstream spectrum to cover the astonishing news that a senior Twitter executive was unmasked as a British army psychological operations officer from their propaganda and online warfare battalion, something that MintPress News covered, but the New York Times, CNN, Fox News, CNBC nor any other national outlet did not.

I Interviewed Haddad in October about the Twitter scandal for Fairness and Accuracy in Reporting and The Canary, asking him why this story was not front-page news given the concern over foreign interference online that has dominated the corporate news cycle for years now. He downplayed the possibility of malevolence, suggesting, perhaps naively, that the entirety of the U.S. press missed the story because it was revealed by a small British publication.

Read also:
Addicted to Military Keynesianism: Why Can’t Even Our Most Progressive Politicians Break with the Military Industrial Complex?

Haddad came across as somebody who was not overtly political but was simply a rare true believer in the clichéd myths of journalism about speaking truth to power and scrutinizing those with it, claiming that editors would always support journalists opposing the government as long as they had their facts straight, an ironic statement given the recent news.

He revealed that the coverage of the weapons of mass destruction saga, where the media refused to be skeptical of the Bush administration’s claims, was the spark that made him want to become a reporter. Since then he has maintained an admirable skepticism of the powerful.

Whether Haddad knew exactly the risks he was taking or whether he was blithely skipping over all the untouchable third rails of modern journalism (like Assange, the Twitter story or the OPCW report), unaware of the danger he was in, is something of a moot point. But it is rare that the world gets to see so publicly the myth of a free and independent press busted.

Feature photo | A journalist looks on during a media tour of a damaged house where OPCW inspectors are believed to have visited in Douma near Damascus, Syria April 23, 2018. Ali Hashisho | Reuters

* Alan MacLeod is a MintPress Staff Writer as well as an academic and writer for Fairness and Accuracy in Reporting. His book, Bad News From Venezuela: Twenty Years of Fake News and Misreporting was published in April.

US Intelligence Believes Ukraine Was Behind Killing of Darya Dugina