On January 6th, an unsigned letter from Brig. Gen. William Seely III, the Marine Corps officer who commands the U.S. coalition against ISIS began circulating media, purportedly announcing that the US-led coalition in Iraq would withdraw.

In a very polite manner, the letter explains that Operation Inherent Resolve respects the Iraqi government’s decision and would start preparing to leave the country within the next few days. 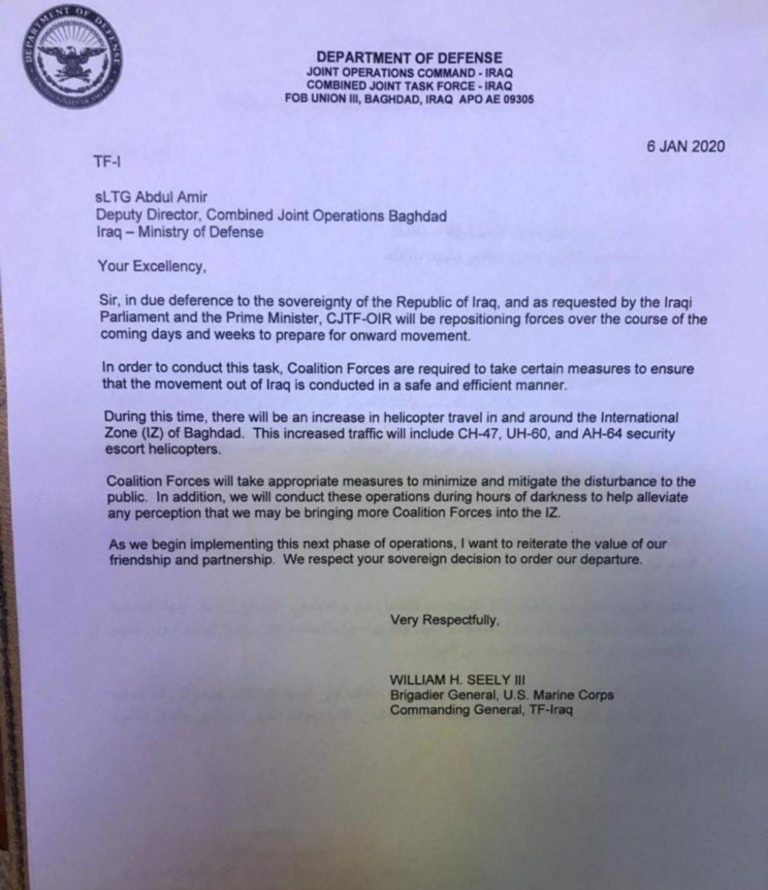 Immediately after the letter began circulating media, the US Department of Defense organized a press briefing with US Secretary of Defense Mark Esper and Gen. Mark A. Milley, chairman of the Joint Chiefs of Staff in attendance.

The two officials said that they were not aware of it and that its contents didn’t reflect the Trump administration’s policy, saying that there were no plans for US forces to withdraw from Iraq.

The letter was legitimate but was never meant to be sent or made public, Gen. Milley said.

“This was a mistake, an honest mistake,” he told reporters. “We understand U.S. government policy. Nobody’s leaving.”

He said Gen. Kenneth McKenzie, US CENTCOM commander, called his subordinates in Iraq to find out what was going on there. He also concluded the letter was sent in error.

“He used other words that were a little more colorful than ‘mistake,’” Gen. Milley said. “… The bottom line is, it should never have happened.”

The Department of Defense’s Press Secretary Alyssa Farah rejected that there was any change of policy for the US.

There has been no change in US policy with regard to our force presence in Iraq. We continue to consult with the Iraqi government regarding the defeat-ISIS mission and efforts to support the Iraqi Security Forces.

Despite that, the situation with the letter shows the state of chaos in the US-led coalition, which is further substantiated by the report that NATO was suspending all training of Iraqi forces to ensure the safety of its mission members.

“The safety of our personnel in Iraq is paramount,” acting NATO spokesman Dylan White said in a statement. “We continue to take all precautions necessary. NATO’s mission is continuing, but training activities are temporarily suspended.”

He said NATO Secretary General Jens Stoltenberg had spoken by phone with U.S. Secretary of Defense Mark Esper and coordinated the actions.

On January 6th, NATO held a meeting on the Middle East tensions, and Jens Stoltenberg gave a press conference after it.

In the entire press point, Stoltenberg mentioned the assassinated General Qassem Soleimani once, saying that the US had rationalized its actions in a closed doors briefing and that he wouldn’t get into further detail.

“The US provided the rationale behind the action against General Soleimani. And we had several briefers from the United States, from the State and from Pentagon and they briefed and explained to other Allies why they took this action against General Soleimani. I will not go into the details of that briefing. I will leave that to the United States. But we value and appreciate the briefings provided by the United States. I think this provides, or once again shows that NATO is a platform where European Allies, North American Allies, are able to come together and address security concerns for all of us.”

The NATO Secretary General further underlined that all Allies appeared to be aligned in their interest to avoid escalation in the Middle East, but still supported the US.

Asked what would happen if Iran carried out some sort of attack that would allow the US to invoke Article 5 of the NATO charter, Stoltenberg said the following, keeping it rather vague:

“I think the important thing now is to really try to de-escalate and to avoid further increase . . . increased tensions in the region. And I think that if I start to speculate on how we will react, this will not help to de-escalate, it will actually do the opposite. So we call on . . . on responsible behaviour. We believe in the importance of de-escalation and restraint. And that was a clear message from all Allies in the meeting today. I will not speculate, because that will actually contribute to the opposite. That will only increase tensions.”

Despite attempting to present it as NATO fully supports the US actions, even Washington’s NATO allies are struggling in finding due justification in assassinating a foreign official in a third country, which is shown in the vague and unclear answers by the Secretary General, and the immediate halting of NATO’s training activities.