In 13 years of running my blog I have never been exposed to such a tirade of abuse as I have for refusing to accept without evidence that Russia is the only possible culprit for the Salisbury attack. The abuse has mostly been on twitter, and much of the most venomous stuff has come from corporate and state media “journalists”. I suppose I am a standing rebuke to them for merely being stenographers to power and never doing any actual research, but that hardly explains the visceral levels of hatred exhibited.

Today they are all terrifically happy and sharing amongst themselves a lengthy twitter thread by a Blairite and chemist called Clyde Davis in which they all say I am “owned” and my article disproven. There are two remarkable things about this thread.

The first remarkable thing is the remarkably high percentage of those who are sharing it with commendations who are mainstream media journalists. Last I saw was George Monbiot five minutes ago, but there are dozens. I suppose it is important to them as validating their decision to support uncritically the government line without doing any actual journalism.

The second remarkable thing is that the thread they are all sharing misses out almost all my side of the conversation. An objective observer might think that made it hard to say who “won” the argument. To be fair, that is probably not deliberate but appears to be a result of how twitter does threading. Here I reconstruct by paste the thread with my responses. It may give a better idea of whether Mr Davis completely “destroys” my article, as the “professional” journalists are all claiming. And as Mr Davies is critiquing my article, perhaps you might refresh yourself on that first here. 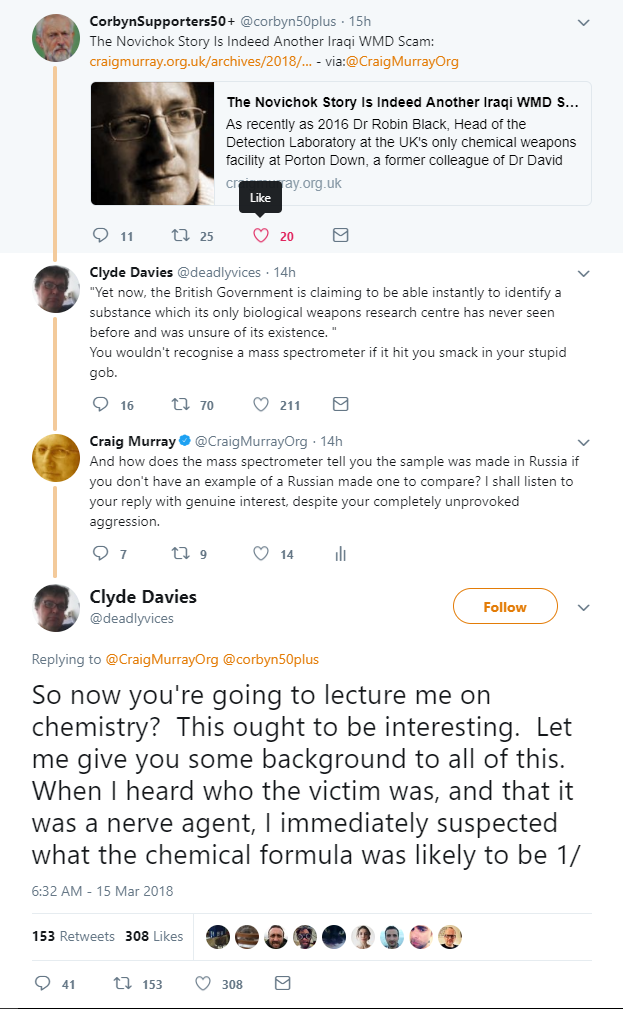 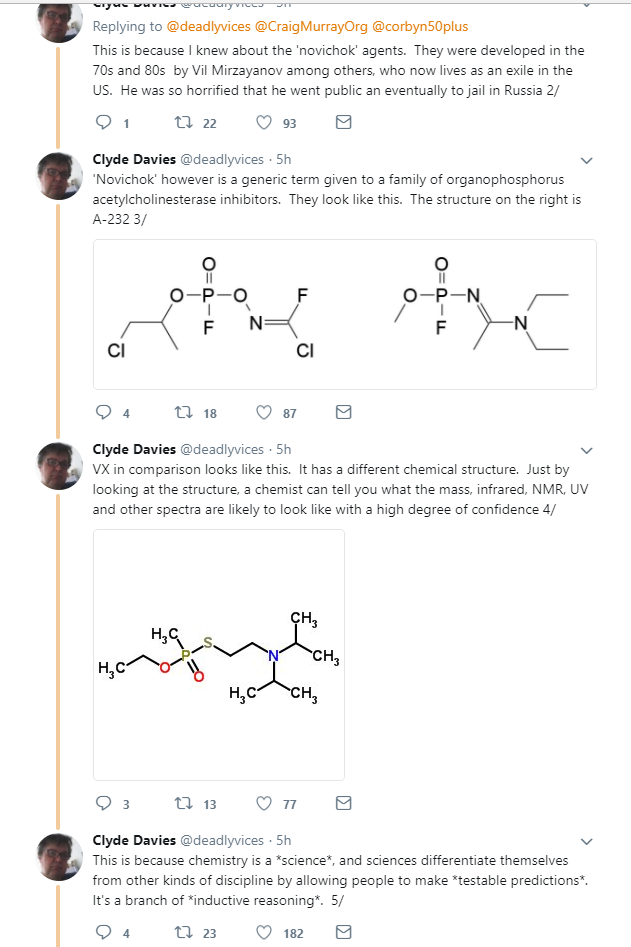 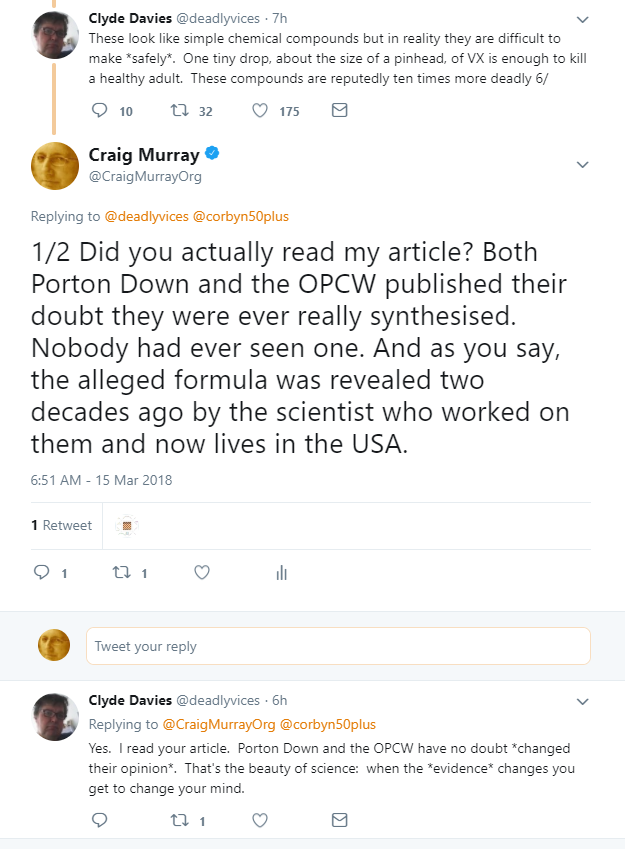 Neither my reply nor Davies’ rejoinder are included in the thread which the mainstream “journalists” are circulating. Note that Davies responds to being challenged, with a riposte which is untrue. The OPCW have never changed their position on the physical existence of “novichoks” from the position I gave and referenced in my article. By contrast, Mr Davies gives no reference for his claim the OPCW has changed its mind. Personally I find it problematic that somebody like Mr Davies who blusters so loud on scientific method, responds to a challenge to his position with an apparent invention.

It is indeed true that Porton Down (which here means the British government), however, have changed their position since 2016 when, as I again demonstrated in my article with references, they said there was no evidence for the physical existence of “novichoks”. Now apparently they have said not only do they have one, but it is indubitably Russian. If a “novichok” is indeed in the possession of Porton Down, of course scientists, like diplomats and the others involved, will change their position on the existence of Novichoks. As will I. But that, in any sense, that will prove it is of Russian manufacture is a totally different question. 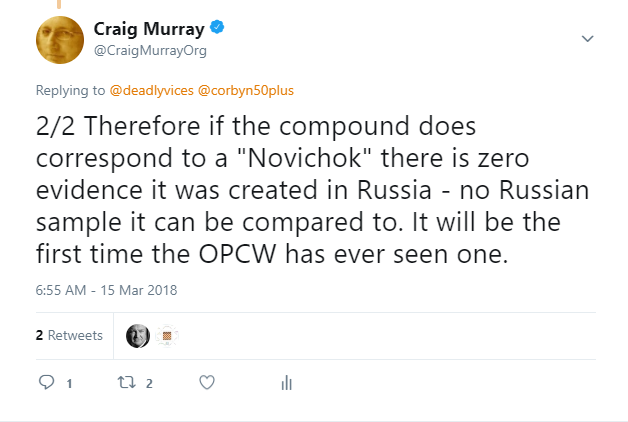 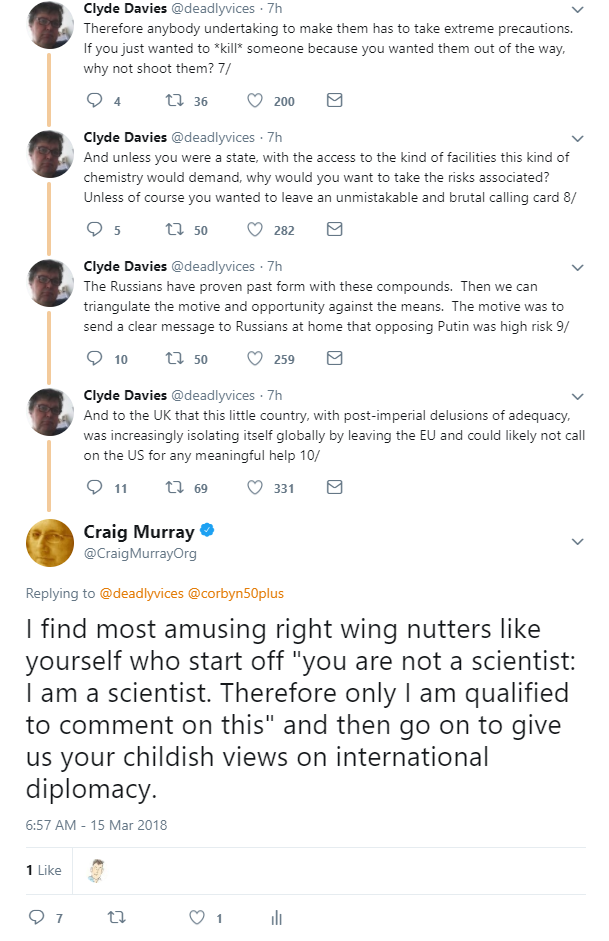 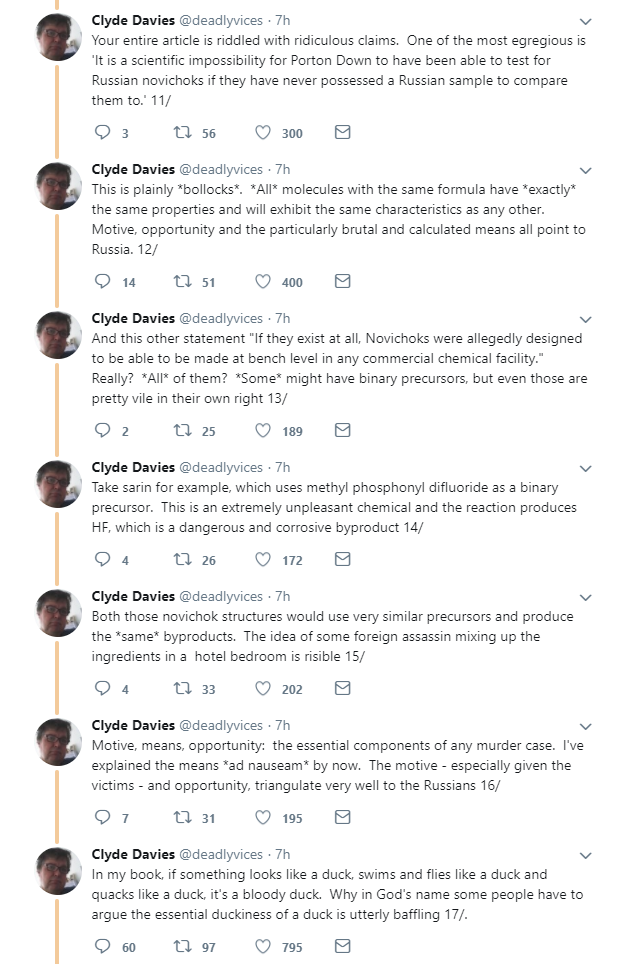 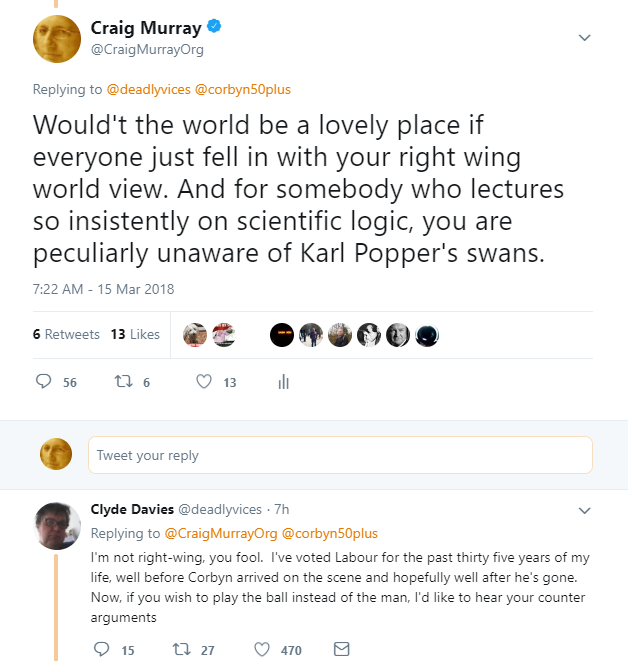 Then along came the man who really did put me to shame. A Mr Kevin Smyth who completely demolished Davis with a simple polite question:

That part of the exchange is also missing from the thread being circulated so gleefully at the moment.

So what does Davies tell us in this article delivered by twitter which “demolishes” my article.

1) Davies acknowledges that until recently Porton Down and OPCW doubted the physical existence of “novichoks”. He says they have now changed their minds. [Porton Down has indeed undergone a remarkable change of mind in the last week , but the OPCW has yet to see the evidence].
2) Davis states that chemists can tell if a compound corresponds to one of the “novichoks” described by Mirzyanov, but Davis specifically accepts that does not prove Russian manufacture.
3) Davis nevertheless states strongly it is Russia because he believes Russia has form and motive.

Nothing here can remotely be said to be conclusive. The question that puzzles me, is why are so many mainstream media journalists gleefully seizing on this series of tweets as a destruction of the need for sceptical inquiry? A possible answer:

1) Davies by claiming credentials as a chemist conforms to the corporate media urge for an appeal to authority. He validates the government line and he is a chemist. He can throw in the names of chemicals and molecular diagrams. That kind of thing impresses journalists. That he explicitly admits the chemistry cannot prove Russia did it, is apparently irrelevant.
2) Davies thus provides a smokescreen of respectability by which they can continue to advance their careers by cutting and pasting the government line without question.

In fact, all of Davies’ “chemistry” in this exchange sets out to prove something which was never disputed – that chemists are able to identify whether or not a substance is one of the “novichok” compounds described by Mirzyanov. But as he published the formulae two decades ago, and has been living in the USA, and as the US dismantled and studied the Nukus plant, and as Porton Down had never seen any evidence the Russians actually succeeded in synthesising “novichoks, this in no way adds up to evidence of Russian manufacture. As Davies, to his credit, finally acknowledged when confronted by an interlocutor for whom he did not have automatic hatred.

I can’t say the midgies bother me that much. But they are interesting to study.