Responding to a series of threats of intervention by the US and Australia, Solomon Islands Prime Minister Manasseh Sogavare warned on Tuesday that his small Pacific islands country was in danger of invasion by the allied powers.

Based on the ultimatums issued by the Biden administration and Australia’s Liberal-National government, backed by the opposition Australian Labor Party, Sogavare’s statement is entirely credible. His warning, and the belligerent reaction to it in Canberra, also highlights the escalating US-led war drive to confront China, even as Washington intensifies its proxy war against Russia in Ukraine.

In an address to parliament in defence of his government’s recent security agreement with China, Sogavare denounced the warnings issued by both the US and Australian governments that no Chinese military presence in Solomon Islands would be tolerated.

Without naming the US or Australia, Sogavare said: “We deplore the continual demonstration of lack of trust by the concerned parties, and tacit warning of military intervention in Solomon Islands if their national interest is undermined in Solomon Islands. In other words, we are threatened with invasion.”

Sogavare’s statement followed US Indo-Pacific co-ordinator Kurt Campbell’s declaration, issued on April 22 during a top-level visit to Solomons Islands, that the US would “respond accordingly” to any Chinese military presence in the country.

Campbell’s threat was swiftly echoed by Australian Prime Minister Scott Morrison, who said a Chinese base in Solomon Islands would be a “red line” for Australia, that is, a trigger for military intervention. Defence Minister Peter Dutton has accused China of “aggression” and said Australia needed to “prepare for war.”

Equally bellicose was the reaction of the Labor Party, which is using the campaign for the May 21 federal election in Australia to position itself as the most reliable and ruthless advocate of Australian and US imperialist interests.

Read also:
Letter from President Maduro as US Threatens Venezuela With War

In an election debate with Morrison, Labor leader Anthony Albanese accused the Coalition of leaving “our backyard” unsecured, allegedly by allowing China to establish a foothold in the region. Labor’s shadow foreign affair minister Penny Wong described the Solomons’ agreement with China as the “worst Australian foreign policy blunder in the Pacific since the end of World War Two.”

Wong’s statement underscores the strategic importance of the Solomons, a country of 700,000 people and hundreds of islands in the southwest Pacific, as well as the other scattered Pacific island states. These islands became key battlegrounds in the US war against Japan in World War II, including the bloody six-month 1942-43 Battle of Guadalcanal in the Solomons.

That war established US domination over the Pacific, which Washington is intent on retaining, with the assistance of Australia, as part of its drive to prevent China from posing any challenge to Washington’s global power.

Sogavare denounced the references in Australia to the Solomon Islands being in Australia’s “backyard.” He said backyards were “where rubbish is collected and burned”, and “where we relieve ourselves.”

The Solomons’ PM also condemned nations that proclaimed “Christian values” but had waged “some of the bloodiest wars in the history of our planet.” That charge certainly applies to the long history of US-led wars, not least those in Vietnam, Afghanistan and Iraq.

Sogavare also said there were “two sides” to the war in Ukraine, as there had been on the 1962 Cuban missile crisis. The latter reference was in response to Australian Deputy Prime Minister Barnaby Joyce, who fuelled the anti-China campaign by claiming that the Solomons’ security agreement with China would result in “our own little Cuba off our coast.”

As Sogavare recounted, the Cuban crisis, which raised the immediate danger of nuclear war, was triggered by the US after Cuba invited the Soviet Union to station missiles on its territory as a deterrent against a US invasion. That followed the botched American “Bay of Pigs” invasion of Cuba in April 1961 and the stationing of US missiles in Italy and Turkey within striking distance of the Soviet Union.

Sogavare has every reason to warn of a military intervention and regime-change operation against his government. His government has been destabilised already by a right-wing separatist movement in Malaita province encouraged by Washington.

One of Sogavare’s previous administrations was ousted in 2006-07 as a result of Canberra’s machinations which were part of a protracted Australian-led military occupation of the Solomons, the 2003 to 2017 “Regional Assistance Mission to Solomon Islands” (RAMSI).

Sogavare has denied any plan for a Chinese military base but that has not halted the threatening allegations against him. On the contrary, just-retired Australian Strategic Policy Institute head, Peter Jennings, who has close links in Washington, said Sogavare’s warning was “as unhinged as Fidel Castro’s.”

Jennings said “Sogavare should remember” that “the Cuban missile crisis ultimately left Cuba isolated from its neighbours in the Caribbean, with a mouldering economy.”

Jennings echoed the alarm in Washington that Australia had failed to prosecute US and allied strategic interests sufficiently aggressively in the Solomons.

Jennings said Sogavare’s reaction to Australian and US concerns over the China agreement showed “Australian politicians have been pandering to Pacific leaders with soft soap rhetoric about the Pacific family.” He added: “When a genuine crisis comes along sometimes we need to remind the region that Australia has security interests that need to be respected.”

Morrison confirmed today that he had not spoken to Sogavare since issuing his “red line” threat. In a bullying tone, he told reporters: “We are Solomon Islands’ primary security partner.” Morrison claimed that Sogavare had conveyed to him agreement with that proposition.

The contemptuous attitude of the US and Australia towards the Solomons’ sovereignty exposes the fraud that the US war plans against China and Russia have anything to do with defending “democracy” or “national sovereignty.”

In provoking war with Russia, Washington and Canberra have said Ukraine’s ability to join the NATO military alliance must be upheld, even if it leads to a nuclear World War III. However, with regard to the Solomons, “national sovereignty” is thrown overboard.

Excerpt of an article published by wsws.org 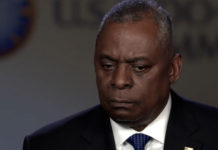