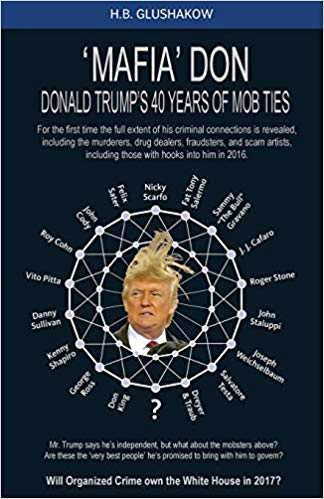 ‘If you don’t know this book, you don’t know your President. Written a year before his inauguration, MAFIA DON correctly predicted Mr. Trump’s ascent to the presidency and the chaos that would surround his first days in office. Mr. Trump is the least transparent person ever to serve as President of the United States, and the book chronicles many dark secrets including Mafia ties through 2017. Throughout his life he has been surrounded, advised and bullied by mobsters. His claims that he is the only person strong and courageous enough to Make America Great Again must be weighed against the fact that in his entire career he never stood up to pressures from the Mob; not even once; not even when he easily could have. Read about the murderers, drug dealers, fraudsters and scam artists that he did business with, defended, befriended and made his advisors. We now know the value Mr. Trump places on keeping his secrets from seeing the light of day: $25 million. That is the amount he paid to the disaffected students of Trump University to deny them the right to be able to ask him questions under oath in a court case. He made that payment within days of winning the election. More at trumptrophy.com. Trump hides things that don’t even need to be hidden. His father Fred was a member of the KKK, a fact fully documented in the MAFIA DON book. But who cares? That was the father, not the son. Nevertheless Trump insists in trying to cover it up by denying it. And he proudly displays Fred’s portrait in the White House–probably the first Klansman ever to have been so honored. And let’s not forget mother Russia. MAFIA DON introduces you to some of Mr. Trump’s Russian contacts; trumptrophy.com updates you with the proof that Russia actually did determine the election in Mr. Trump’s favor. Proof. Donald Trump is President. You may not like it, but it’s a fact of life. What you do about it is simple. 1) You must gain a greater knowledge of the man called Trump. This you will do on the pages of MAFIA DON. 2) You also must admit that you were part of the process that got Mr. Trump elected. Those two simple actions are all that is needed for anyone with the interest to begin to initiate some effective control over Mr. Trump. (If you are frustrated by your impotence, try the above two steps.) Whenever Mr. Trump has been closely questioned about his Mob ties he has resorted to a single defense to deflect those questions: he claims the licenses granted him by the New Jersey Casino Control Commission that allowed him to operate his Atlantic City casinos prove he is untainted by mob connections. For the first time, the MAFIA DON book investigates that defense and finds it worse than no defense at all since those New Jersey regulators had their own ties to organized crime. The MAFIA DON book examines Mr. Trump’s ethics record in detail. The preponderance of his actions shows him to have worked almost exclusively for his own personal gain and self-enrichment to the detriment of the greater good. Ethics as applied to the Trump presidency is thoroughly reviewed at trumptrophy.com. MAFIA DON chapters include his part in the rape of Atlantic City, his bankruptcies, and his role in destroying the United States Football League. Chapters on China and Mexico explain the facts of American trade with those countries and describe how Trump’s approach to them is akin to trying to fix a broken smart phone with a sledgehammer. The book closes with advice to Americans and foreign leaders alike on how to deal with the Trump presidency if it should result in a breakdown of the rule of law or a constitutional crisis. Read this book. If you don’t know this book, you don’t know Mr. Trump.’