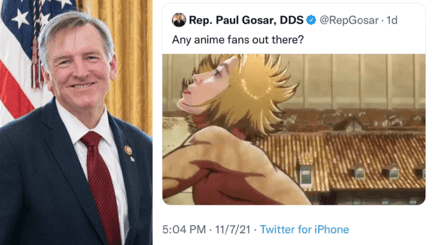 The video, which has been viewed more than 3 million times and has since been removed from Gosar’s Twitter and Instagram accounts, also contains imagery depicting bloodshed against immigrants entering the US, as well as a sword attack on President Joe Biden.

Gosar’s 90-second video is based on modified clips from a Japanese anime series called “Attack on Titan,” a story about a hero who sets out to destroy giant creatures who have devoured most of human civilization. The animated portions of the video are interspersed with real-life footage of Border Patrol police rounding up immigrants crossing into the US from Mexico.

The video shows two fellow fascists among the Republican members of the House, Florida Representative Matt Gaetz and Georgia Representative Marjorie Taylor Greene. Greene was removed from her House committee assignments last spring after she repeatedly stalked Ocasio-Cortez in the Capitol building and threatened violence against her.

When he posted a link to the video on Twitter, Gosar wrote, “Any anime fans out there?” Anime is a popular genre of animation that originated in Japan. The “Attack the Titan” TV series premiered in 2013 and is streamed in the US on Amazon Prime and Hulu.

In response to public outrage against his video—many people have called for the congressman to be expelled from Congress and arrested—Gosar posted a meme on Twitter that said, “It’s a cartoon. Relax.”

While it is a felony to threaten the life of or inflict bodily harm on the US president, the response of the Democrats, including Representative Ocasio-Cortez herself, has been one of predictable passivity.

Ocasio-Cortez’s post on Twitter late Monday said, “So while I was en route to Glasgow, a creepy member I work with who fundraises for Neo-Nazi groups shared a fantasy video of him killing me. And he’ll face no consequences bc [because] @GOPLeader [Kevin McCarthy] cheers him on with excuses. Fun Monday! Well, back to work bc institutions don’t protect woc [women of color].”

On Tuesday, Speaker of the House Nancy Pelosi tweeted that “threats of violence” against members of Congress and the president “must not be tolerated.” While she offered no specific actions of her own, Pelosi called on Republican House Minority Leader Kevin McCarthy to “join in condemning this horrific video and call on the Ethics Committee and law enforcement to investigate.”

Thus, in keeping with the response of the Democrats to the assault on the US Capitol on January 6, Pelosi is deferring to the leader of the increasingly fascistic House Republicans to avoid taking any measures herself against the violence of the far right.

As of this writing, Minority Leader McCarthy has refused to comment on Gosar’s video and attempts by the news outlets to reach him have gone unanswered.

Meanwhile, Gosar’s digital director Jessica Lycos said on Monday evening, “The left doesn’t get meme culture. They have no joy. They are not the future. It’s a cartoon. Gosar can’t fly and he does not own any light sabers. Nor was violence glorified. This is about fighting for truth.”

Paul Gosar, a former dentist who is the US representative for Arizona’s 4th District and first took office in 2010, is known for his far-right politics and ties to white supremacist and fascist groups such as the Proud Boys and the Oath Keepers.

Gosar was one of the principal advocates in Congress of Trump’s “Stop the Steal” campaign and has repeatedly held up Ashli Babbitt as a martyr for the fascist “Make America Great Again” movement. Babbitt was the Trump supporter who tried to force her way into the Speaker’s Lobby on January 6 and was shot and killed by Capitol Police.

Gosar was involved in previous “Stop the Steal” rallies held in November and December of 2020, which were effectively dress rehearsals for the main event on January 6 and involved the mobilization of paramilitary groups along with Trump supporters incited by White House claims that the election had been stolen.

During a House Oversight Committee hearing held in May of this year, Gosar provocatively asked former acting Attorney General Jeffrey Rosen whether Ashli Babbitt was “executed” by Capitol Police.

Gosar also claimed that the Department of Justice was “harassing peaceful protesters and veterans” and that the real conspiracy theory was the suggestion that Republican legislators, such as himself, had aided far-right militia members prior to the coup.

In a June hearing featuring FBI Director Christopher Wray, Gosar said that Babbitt was “executed” and that the cop who shot her was “lying in wait” and “gave no warning before killing her.”

Gosar repeated the same themes in a video eulogy to Babbitt on Sunday. As he has in past speeches, he demanded “full transparency and accountability surrounding the murder of Ashli,” and vowed that he would not stop asking questions or “demanding justice for Ashli.”

The New York Times has reported that Gosar attended at least two Oath Keepers meetings about a year apart and visited another chapter “a few years earlier.” The Times quoted an Oath Keepers leader who asked Gosar if the United States was headed for a civil war, to which Gosar replied, “We’re in it. We just haven’t started shooting at each other yet.”

Gosar also reportedly promised planners of the January 6 attack on Congress that Trump would issue a full pardon for anyone charged with a crime as a result of the insurrection. This is a clear indication that both he and those to whom he was speaking were aware in advance of the impending criminal assault on the US Capitol.

On February 26, 2021, Gosar gave the keynote speech to the America First Political Action Conference hosted by white nationalist, anti-Semite and Holocaust denier Nick Fuentes. Gosar was joined at the event by former Representative Steve King of Iowa, who was removed from his congressional committee seats after defending white nationalism in 2019.

Gosar’s anime video is not a joke and should be taken as a serious warning to the working class that those who conspired to install Donald Trump as presidential dictator with a violent attack on Congress are still actively pursuing their aims. The cowardly response of the Democrats to the encouragement of violence against members of Congress and the US president is consistent with their refusal to conduct a serious investigation of the attempted coup and prosecute those who organized it, beginning with Trump and including Republican co-conspirators such as Gosar.

The Biden administration and the Democratic Party are themselves conspiring to cover up the full scope of the fascist attack of January 6 and its accomplices within the Republican Party and the state. It is nearly three weeks since the House voted to hold Stephen Bannon in contempt for defying a subpoena from the House Select Committee on January 6, and Biden’s attorney general, Merrick Garland, has failed to initiate a criminal investigation of Bannon. This has only emboldened the Republicans and their far-right paramilitary allies.

How Trump and Miller prepared a military takeover in the US

Behind Zelensky: The Far Right international Party of War