There was a time when the contamination of drinking water constituted a punishable crime. Nowadays those who willfully ignore or promote the destruction of the Earth’s atmosphere and ocean acidification through the rise in emission of carbon gases (2014 ~36.08 billion ton CO2/year ; 2017 ~36.79 billion ton CO2/year), hold major sway in the world.

Consequently the rise rate of atmospheric CO2 at 2 ppm/year (from 408.84 ppm in June 2014 to 410.79 ppm in June 2018) is the fastest observed in the geological record since 66 million years ago, when an asteroid hit the Earth, wiping out the dinosaurs.(See this). The hapless residents of planet Earth are torn between survival in several parts of the world and sport circuses in other parts, while some of their representatives are playing with chunks of coal in their parliament. 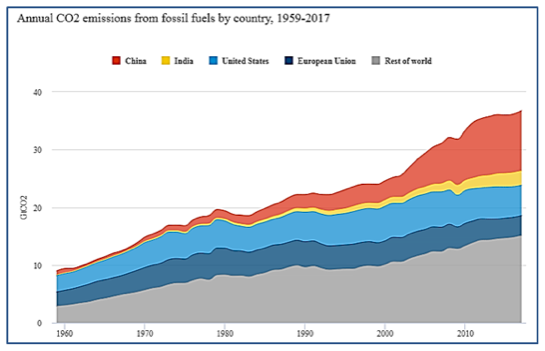 The consequences in terms of heat waves, fires, droughts, storms, floods, human lives and devastation of nature are everywhere. From Japan to Sweden, Oman to Texas and California, a global heat wave is setting records, igniting wildfires, and killing hundreds. (See this)

The south-central region is home to the highest temperatures in the U.S. this week, with nearly 35 million people living under excessive heat warnings issued by the National Weather Service. Temperatures are expected to be in the triple digits across Texas this weekend, marking the most severe heat wave in the state since 2011. The Texas heat has already led to record-breaking days for the Texas power grid twice this week. Things aren’t any better elsewhere in the region, with heat indexes in Oklahoma, Arkansas, and Louisiana reaching up to 110 degrees.

Dozens are dead in Japan from record-setting, long duration extreme heat event. Across the globe in Kyoto, Japan, Thursday marked the seventh straight day of temperatures that exceeded 100 degrees, breaking all known records for the ancient capital city. At least 30 people have died in Japan during the heat wave, which has complicated rescue efforts following floods and landslides that killed more than 200 in western Japan earlier this month. On Thursday alone ten people died and 2,605 people were sent to hospitals in Tokyo due to heat, the Japan Times reports. The day before, Tokyo rescue workers set a record by responding to more than 3,000 emergency calls.

In Sweden, the Arctic Circle is on fire. High temperatures and a prolonged drought have caused 49 fires to ignite across Sweden, with temperatures reaching 90 degrees as far north as the Arctic Circle this week. According to the Washington Post, temperatures in Scandinavia typically settle in the 60s and 70s this time of year, meaning the current heat wave is making things around 20 degrees hotter than normal. In Quebec, more than 90 people were killed by extreme heat in early July. An Algerian city earlier this month broke the record for the highest temperature ever in Africa when it hit 124.3 degrees.

The current heatwave has been caused by an extraordinary stalling of the jet stream wind, which usually funnels cool Atlantic weather over the continent. This has left hot, dry air in place for two months – far longer than usual. The stalling of the northern hemisphere jet stream is being increasingly firmly linked to global warming, in particular to the rapid heating of the Arctic and resulting loss of sea ice.

Extensive reports in the mainstream media hardly mention the term “climate change”, thus covering up on the underlying factors for these events.

“This is the face of climate change … We literally would not have seen these extremes in the absence of climate change … The impacts of climate change are no longer subtle … We are seeing them play out in real time and what is happening this summer is a perfect example of that … We are seeing our predictions come true …Mann points out that the link between smoking tobacco and lung cancer is a statistical one, which does not prove every cancer was caused by smoking, but epidemiologists know that smoking greatly increases the risk. “That is enough to say that, for all practical purposes, there is a causal connection between smoking cigarettes and lung cancer and it is the same with climate change,”

Read also:
Climate change is an emergency for everyone, everywhere

Australia, emitting 138 million tons of CO2e in 2017 and exporting in 2017 200 million tonnes thermal coal and 172 million tons metallurgical coal, is currently suffering major consequences in terms of draughtin New South Wales, north-west Victoria and eastern South Australia. (See this). The factors, as explained by Blair Trewin of the Bureau of Meteorology, include:

“a stronger than usual sub-tropical ridge over southern Australia. That means that frontal systems that would normally start affecting southern Australia more generally during the winter are instead mostly passing south of the continent, really only affecting Tasmania and perhaps southern Victoria.”

Although the polar-ward migration of climate zones pushed southward by the tropical Hadley Cell constitutes an integral feature of global climate change, rarely does the term “climate change” appear in relevant government and farmers’ statements. Orwellian Newspeak has won the day once again, where talk about the “National energy guarantee” appears to divert attention from the global climate crisis to power prices, in a country where the sky is the limit for alternative clean energy—solar, wind and tide.