Israeli Authorities and the Crimes of Apartheid and Persecution

About 6.8 million Jewish Israelis and 6.8 million Palestinians live today between the Mediterranean Sea and Jordan River, an area encompassing Israel and the Occupied Palestinian Territory (OPT), the latter made up of the West Bank, including East Jerusalem, and the Gaza Strip. Throughout most of this area, Israel is the sole governing power; in the remainder, it exercises primary authority alongside limited Palestinian self-rule. Across these areas and in most aspects of life, Israeli authorities methodically privilege Jewish Israelis and discriminate against Palestinians. Laws, policies, and statements by leading Israeli officials make plain that the objective of maintaining Jewish Israeli control over demographics, political power, and land has long guided government policy. In pursuit of this goal, authorities have dispossessed, confined, forcibly separated, and subjugated Palestinians by virtue of their identity to varying degrees of intensity. In certain areas, as described in this report, these deprivations are so severe that they amount to the crimes against humanity of apartheid and persecution.

Several widely held assumptions, including that the occupation is temporary, that the “peace process” will soon bring an end to Israeli abuses, that Palestinians have meaningful control over their lives in the West Bank and Gaza, and that Israel is an egalitarian democracy inside its borders, have obscured the reality of Israel’s entrenched discriminatory rule over Palestinians. Israel has maintained military rule over some portion of the Palestinian population for all but six months of its 73-year history. It did so over the vast majority of Palestinians inside Israel from 1948 and until 1966. From 1967 until the present, it has militarily ruled over Palestinians in the OPT, excluding East Jerusalem. By contrast, it has since its founding governed all Jewish Israelis, including settlers in the OPT since the beginning of the occupation in 1967, under its more rights-respecting civil law. 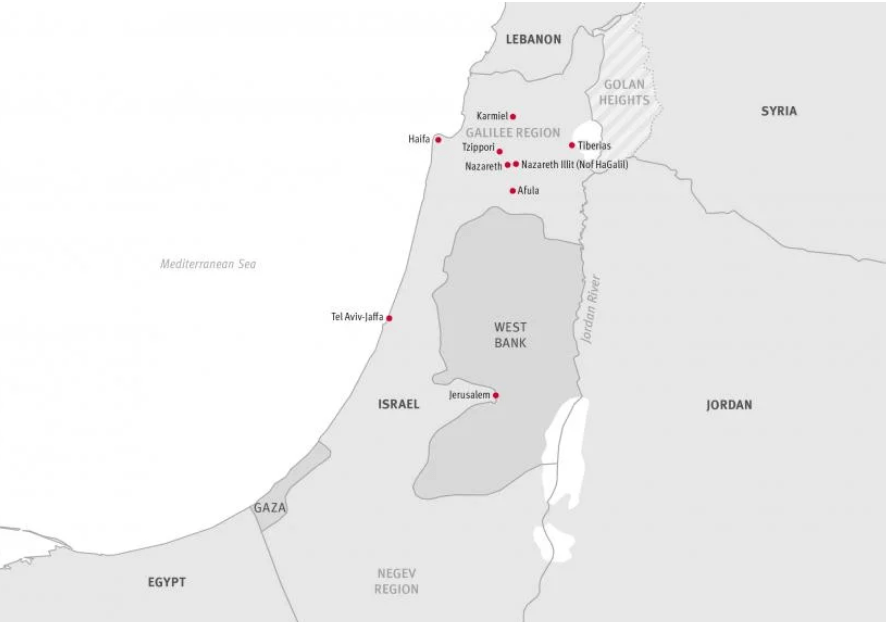 For the past 54 years, Israeli authorities have facilitated the transfer of Jewish Israelis to the OPT and granted them a superior status under the law as compared to Palestinians living in the same territory when it comes to civil rights, access to land, and freedom to move, build, and confer residency rights to close relatives. While Palestinians have a limited degree of self-rule in parts of the OPT, Israel retains primary control over borders, airspace, the movement of people and goods, security, and the registry of the entire population, which in turn dictates such matters as legal status and eligibility to receive identity cards.

A number of Israeli officials have stated clearly their intent to maintain this control in perpetuity and backed it up through their actions, including continued settlement expansion over the course of the decades-long “peace process.” Unilateral annexation of additional parts of the West Bank, which the government of Prime Minister Benjamin Netanyahu has vowed to carry out, would formalize the reality of systematic Israeli domination and oppression that has long prevailed without changing the reality that the entire West Bank is occupied territory under the international law of occupation, including East Jerusalem, which Israel unilaterally annexed in 1967.

The international community has over the years detached the term apartheid from its original South African context, developed a universal legal prohibition against its practice, and recognized it as a crime against humanity with definitions provided in the 1973 International Convention on the Suppression and Punishment of the Crime of Apartheid (“Apartheid Convention”) and the 1998 Rome Statute of the International Criminal Court (ICC).

The crime against humanity of persecution, also set out in the Rome Statute, the intentional and severe deprivation of fundamental rights on racial, ethnic, and other grounds, grew out of the post-World War II trials and constitutes one of the most serious international crimes, of the same gravity as apartheid.

The State of Palestine is a state party to both the Rome Statute and the Apartheid Convention. In February 2021, the ICC ruled that it has jurisdiction over serious international crimes committed in the entirety of the OPT, including East Jerusalem, which would include the crimes against humanity of apartheid or persecution committed in that territory. In March 2021, the ICC Office of Prosecutor announced the opening of a formal investigation into the situation in Palestine.

The term apartheid has increasingly been used in relation to Israel and the OPT, but usually in a descriptive or comparative, non-legal sense, and often to warn that the situation is heading in the wrong direction. In particular, Israeli, Palestinian, US, and European officials, prominent media commentators, and others have asserted that, if Israel’s policies and practices towards Palestinians continued along the same trajectory, the situation, at least in the West Bank, would become tantamount to apartheid.[1] Some have claimed that the current reality amounts to apartheid.[2] Few, however, have conducted a detailed legal analysis based on the international crimes of apartheid or persecution.[3]

In this report, Human Rights Watch examines the extent to which that threshold has already been crossed in certain of the areas where Israeli authorities exercise control.

Definitions of Apartheid and Persecution

The prohibition of institutionalized discrimination, especially on grounds of race or ethnicity, constitutes one of the fundamental elements of international law. Most states have agreed to treat the worst forms of such discrimination, that is, persecution and apartheid, as crimes against humanity, and have given the ICC the power to prosecute these crimes when national authorities are unable or unwilling to pursue them. Crimes against humanity consist of specific criminal acts committed as part of a widespread or systematic attack, or acts committed pursuant to a state or organizational policy, directed against a civilian population.

The Apartheid Convention defines the crime against humanity of apartheid as “inhuman acts committed for the purpose of establishing and maintaining domination by one racial group of persons over any other racial group of persons and systematically oppressing them.” The Rome Statute of the ICC adopts a similar definition: “inhumane acts… committed in the context of an institutionalized regime of systematic oppression and domination by one racial group over any other racial group or groups and committed with the intention of maintaining that regime.” The Rome Statute does not further define what constitutes an “institutionalized regime.”

Read also:
Saudi Arabia has to be stopped and this time it may get stopped

The crime of apartheid under the Apartheid Convention and Rome Statute consists of three primary elements: an intent to maintain a system of domination by one racial group over another; systematic oppression by one racial group over another; and one or more inhumane acts, as defined, carried out on a widespread or systematic basis pursuant to those policies.

Among the inhumane acts identified in either the Convention or the Rome Statute are “forcible transfer,” “expropriation of landed property,” “creation of separate reserves and ghettos,” and denial of the “the right to leave and to return to their country, [and] the right to a nationality.”

The Rome Statute identifies the crime against humanity of persecution as “the intentional and severe deprivation of fundamental rights contrary to international law by reason of the identity of the group or collectivity,” including on racial, national, or ethnic grounds. Customary international law identifies the crime of persecution as consisting of two primary elements: (1) severe abuses of fundamental rights committed on a widespread or systematic basis, and (2) with discriminatory intent.

Few courts have heard cases involving the crime of persecution and none the crime of apartheid, resulting in a lack of case law around the meanings of key terms in their definitions. As described in the report, international criminal courts have over the last two decades evaluated group identity based on the context and construction by local actors, as opposed to earlier approaches focused on hereditary physical traits. In international human rights law, including the International Convention on the Elimination of All Forms of Racial Discrimination (ICERD), race and racial discrimination have been broadly interpreted to include distinctions based on descent, and national or ethnic origin, among other categories.